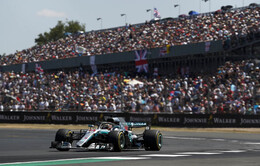 Despite the party atmosphere at Silverstone over the weekend, the mood flattened just a little by Sebastian Vettel's defeat of Lewis Hamilton, the fact remains that, as it currently stands, after next year's race the iconic British circuit falls from the calendar.

Despite a long term contract which secured the race until 2026, it finally dawned on the circuit's owners - the British Racing Drivers' Club (BRDC) - that the deal agreed with Bernie Ecclestone which included an annual 5% increment, meant that by the end of the contract what had begun as an £11.5m fee would have risen to £25m.

Unable to agree new terms, and faced with mounting losses, ahead of last year's race the BRDC took advantage of a clause which allowed it to terminate the contract early, leaving 2019 as the final race.

While the sport's new owners are adamant that they want to keep Silverstone on the calendar, to accept a lesser fee would send a clear signal to other tracks. Furthermore, FOM has made no secret of its desire to take the sport into "destination cities", and where better than London.

Speaking at Silverstone yesterday, F1's technical boss Ross Brawn, insisted that the sport is keen to keep Silverstone on the calendar but that talks must be kept secret, the Briton accusing the BRDC of playing out the saga in front of the media.

"I'm sure we're going to find a solution because we cannot leave this behind," he told Sky Sports, as he gestured to the crowd.

"The frustration is the negotiations are taking place in public," he continued. "Every circuit we deal with, we do it quietly and get on with it, but for some reason Silverstone chooses to make everything public, which causes more difficulties. But we'll find a solution."