Renault to use strategic grid penalties? 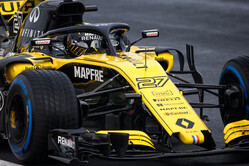 Inevitably, with drivers limited to just three engines over the course of this year's 21 race schedule, those that already have an eye on their reliability in previous seasons are considering their options.

As a result it comes as no surprise to hear that Renault, which suffered more than its fair share of failures last season - just ask Red Bull or Toro Rosso - is considering a strategy for its own team whereby it takes grid penalties at tracks where it expects to struggle in order to ensure its competitiveness at others.

"I don't want to say too much about it at this stage, because it's still early days," said Cyril Abiteboul, according to ESPN. "But we knew this regulation was coming and we know what we had to do, and we are still a bit open-minded about the best way we want to cover the season.

"We are also looking carefully at the evolution of the sporting regulations in terms of grid penalties," he admitted. "You may know that this has become a bit more flexible, a bit less painful, so we will factor that into the way we are building the plan for this year in terms of engine introduction and possible engine penalties if we have to or if we think that this is tactically in our advantage to do so. But it's too early days to talk about that."

Asked to clarify that this meant the possibility of starting a couple of races from the back of the grid in order to ensure strong performances at the remaining races, he said: "I'm accepting and recognising the fact that in Formula One you need to optimise. You need to optimise potential. And if it's better for everyone to use four power units, four ICEs rather than three, we may take that decision, but it's really too early to talk about that.

"First I want to see where we are sitting in the pecking order in terms of mileage, in terms of reliability, in terms of performance against what we've measured on the dyno, and also the priorities that will be set between Enstone and Viry for the Renault team which is what we are doing the most."

"We want also to learn more about the car, about the competitiveness, where the other teams are. That's another thing that will factor into the debrief in the aftermath of the test, and from that point onward we will plan for the remainder of the season including in terms of the number of power units we want to use, in terms of potential of development and so on.''