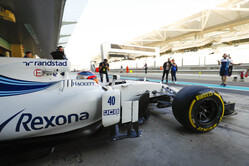 While finishing ninth on the timesheets (of twelve), over 3.5s adrift of the pace-setter, might be seen as something of a disappointment, for Robert Kubica it represents another massive step towards a dramatic return to the sport just seven years after almost losing his arm in a horrific rallying accident.

The Pole, who has never lost sight of his dream, today took to the Yas Marina circuit completing 100 laps in a Williams he had never driven before.

His morning's work done, Kubica faced a cynical F1 media that while hoping against hope that he can make a fairy-tale return to the sport, remains sceptical that the Pole will be competitive enough in a sport that has become even harder over the intervening years.

"It has not been easy," he said, "but I am in far better physical shape than when I was racing in 2010. The motivation is there and the body is reacting in a good way.

"I am starting from scratch because Formula One has changed so much over the past seven years, but the experience I gained while racing in F1 has helped me to get on top of the learning process. One positive thing is how my body is reacting and how natural I feel every day when I am driving these cars, so that gives me a lot of confidence."

While attempting to keep his right arm hidden, especially from the cameras, the Pole was keen to rubbish media claims that he is only able to drive with one hand.

"There is someone saying I'm driving one-handed, I'm not driving one-handed," he said. "I think it's impossible to drive a Formula 1 car with one hand. But I have some limitations so in some way my body used some compensations, which is not wrong.

"We are human beings and our brains are used to help our bodies overcome disabilities," he said. "This is normal daily life. I think I am on top of this.

"What the future will bring, I do not know," he admitted, "but today was the kind of day that if nothing else happens there will be disappointment because I feel confident and comfortable."

Check out our Tuesday gallery from Yas Marina, here.