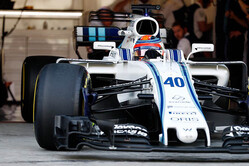 While there remain many boxes to be ticked before Williams agrees a deal that would see Robert Kubica make a sensational return to the F1 grid just seven years after the rally crash that almost severed his arm, this morning at Yas Marina he surely ticked some of them.

On his debut in the Grove outfit's 2017 contender, the FW40, the Pole completed 100 laps before handing the car over to his potential teammate, Lance Stroll, for the afternoon session.

Previously, Kubica's outings for Williams have been in the 2014 car, indeed his only experience in contemporary F1 machinery being the Renault he drove in Hungary in the summer.

Posting the eighth best time of the morning, albeit 3.5s off pace-setter Kimi Raikkonen's best, Kubica is aware that at this stage the Grove outfit isn't looking at times, rather consistency, and on a personal level stamina. Thus far, all appears well.

Scheduled to take over the car from Sergey Sirotkin tomorrow afternoon, Kubica is due to test the new hypersoft tyre along with the 2018 ultras, supers, soft and mediums.

Favourite to partner Stroll next season, Kubica, who had his 'assistant manager', Nico Rosberg, in attendance, faces competition for the second Williams seat from Paul di Resta, Sirotkin, Daniil Kvyat and Pascal Wehrlein.

The Grove outfit has made it clear that no matter the results of this week's test it has no need to make an announcement any time soon, and may well opt to hold off until the new year.

Check out our Tuesday gallery from Yas Marina, here.