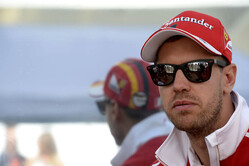 Reacting to Sergio Marchionne's claim that "driver error or misjudgement" played a part in Ferrari's failure this season, Sebastian Vettel has admitted that Baku, in particular, was a mistake that stands out.

"I don't believe in bad luck," said Marchionne during the same conference call in which he warned his team might quit the sport if Liberty Media's plans for the future of F1 are not agreeable. "Ultimately it's a reflection of the way in which we manage these businesses.

"It was a combination of, especially in the second half of the season, technical issues and driver error, or driver misjudgement," he claimed.

Asked about the Ferrari president's claim ahead of this weekend's race in Interlagos, two weeks after Lewis Hamilton secured the 2017 title, Vettel Said: : "I think that's fair enough.

"I think there are always things that you could do a bit different," he continued. "Overall, I think we can all agree that we didn't have the season, up to this point, that we could've had or should've had for various reasons."

Asked whether he had made mistakes, the German replied: "I think looking back Baku stands out obviously, but for the rest I think it's been OK."

Though Vettel still led the title race after Baku, his move on Hamilton in which the German appeared to deliberately ram the Mercedes turned public opinion against him, and while the Briton was subsequently hampered by a loose headrest meaning an extra pit stop and consequent loss of points, not only was the Ferrari driver punished for the move he lost out on what would have been a sure-fire win.

That said, it was after the summer break that Ferrari's challenge really fell apart, and other than the start-line crash in Singapore, reliability was the main factor, that and Mercedes ongoing all-round superiority.

Nonetheless, Vettel remains upbeat, and is seeking to build on the form he showed in qualifying in Mexico.

"I'm part of the team so I think we all live through the season together, and the same is for the next two races.

"Morale is good, the guys have had a very tough time in the last couple of weekends with a lot of big changes, set-up changes and long nights etc. So we hope for two calm weekends to finish the season and not calm in terms of results, we are aiming for the maximum."