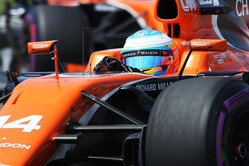 It was a race that never truly came together for either driver: Fernando's grid penalties left him at the back of the grid. And while he climbed through the field remorselessly, it wasn't easy to overtake, and he narrowly failed to make it into the top 10, despite a fierce chasedown of Felipe Massa in the final laps.

Stoffel's race came undone at the second corner when he tangled with Kimi Raikkonen. It dropped him down the order and left him picking up the pieces for the rest of the afternoon. His engineers opted for a two-stop strategy, but it still wasn't enough to help him vault the cars ahead.

Fernando Alonso: "We started 20th and we finished 11th, with a good recovery, with only one pit-stop, and starting on a used set of tyres. That was a pretty huge effort from everyone on the team. After the penalty on Friday night, due to the engine change, I think we deserved that one point - we fought hard for it.

"It was an unlucky situation with Felipe towards the end of the race. He was struggling a lot with his tyres when the Virtual Safety Car came out. That meant he could breathe a little bit during those laps. Then, in the last two laps, the leaders of the race caught up with us, and Felipe again missed out on an attack, and ultimately took the point for 10th place.

"We'll try again in Austin. Hopefully with no penalties. And from our usual grid position. And with some better luck..."

Stoffel Vandoorne: "We've had a couple of good races; but today's was one to forget, really.

"I made a reasonable start, then, as we went into Turn Two, and everyone was trying to find some space, I got hit by Kimi. I don't think it was intentional, it was just cars being in the wrong places at the wrong time.

"My afternoon was compromised from that point - I fell to the back, and drove my own race to the flag. Nonetheless Suzuka is a very special place, so it's just a shame we couldn't get a good result for all the thousands of fans in the grandstands today.

"The team deserves a bit of a break after this tough Asian triple-header. They've done a fantastic job in the past three races, now it's time to go back to Europe and hit back hard in the final four races."

Eric Boullier: "Today was just not our day, despite two strong and relentless drives from Fernando and Stoffel. After the difficulties of qualifying, Fernando drove with fearsome commitment today, but was unlucky to walk away without a point, despite a stirring chase of Felipe.

"Stoffel's race was compromised at Turn Two, when he was pushed down the order after being hit by Kimi. But that's what happens in racing, sometimes, and he too pushed hard for the remainder of the afternoon.

"Still, on the whole, this Asian triple-header has been a positive one for the whole team. We've scored some useful points, and I certainly think that we come out of it stronger as a team than when we went in. We'll definitely put that momentum to good use in the final four races.

"Finally, I want to pay tribute to two important groups of people. First, to the whole team for their indefatigable spirit and hard work over five gruelling weeks overseas. Theirs has been a tremendous effort, and I am remarkably grateful for their sheer effort and commitment.

"Second, I want to pay my regards, as ever, to the remarkable Suzuka fans. Their spirit, and enthusiasm is incredibly inspiring, and, while we couldn't reward them with a strong result today, we're grateful for their support, their passion for McLaren Honda, and for Formula 1 as a whole.
"We'll push hard in these final four races with a renewed momentum and confidence."

Yusuke Hasegawa: "It was disappointing that we were unable to finish in the points in our final home grand prix as McLaren Honda.

"Fernando started his race from the back of the grid but he maintained a competitive pace with the cars running ahead. He just narrowly missed out on 10th place after chasing down Massa in the closing laps. I think he had the pace to score points today, so it's a shame.

"Stoffel started his race from ninth but he lost his position due to an unfortunate incident at Turn Two immediately after the start of the race. Luckily, he didn't have any significant damage and was able to continue on, but it was a difficult race and very much damage-limitation for the remaining laps.

"This is our home grand prix, so we obviously have very strong feelings for this race. I want to say a huge thank-you to all of the fans that turned out to support us and also to the team who worked tirelessly throughout the weekend - it is a shame they weren't rewarded with any points, but we still have four races left this season and we'll continue to battle to the end."