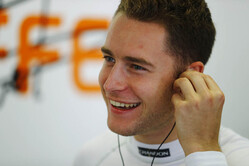 Stoffel Vandoorne took his second consecutive seventh position in a race after finishing what he described as 'the best race of my F1 career' in today's Malaysian Grand Prix.

Stoffel had qualified seventh, and made an excellent start to run as high as fifth in the opening laps, only ceding positions to Sergio Perez and Sebastian Vettel during the race.

That finishing position was a validation of all Stoffel's hard work with the team, and particularly sweet given the team's expectation that its race pace would not match its strong qualifying pace.

Fernando finished 11th, narrowly missing out on a world championship point. His race never quite fell into a groove - he was delayed at the second corner by cars rubbing wheels ahead of him, and was often embroiled in long scraps with other cars in the midfield. He, too, drove a faultless race - but was unable to fully capitalise.

Fernando Alonso: "It was a tough race today. From the very beginning, at the second corner, the two Williams touched in front of me, and made me lose a few positions. As a result, we ended up in the secondary group, running a little slower than our true pace, and could not overtake.

"So I lost a lot of time, and that really compromised our race. A shame, definitely not one of our best races today.

"But we'll have better days, and, hopefully in Japan, we'll come back with stronger form, and I'll be able to add my contribution to the constructors' championship on Honda's home ground.

"Having scored points at this track and at Singapore, two very different circuits, is really good for the team. I hope we can continue scoring more points in the remaining races."

Stoffel Vandoorne: "I can say that this was my best ever race in Formula 1 - up until now. All weekend, I've been really strong and felt really confident with the car. After qualifying seventh, we weren't really confident about where we'd finish in the race, so to pull off seventh today is an amazing result.

"I made a great start; we knew it was probably going to be difficult to hold off the Force Indias and the Williams behind, but only Perez came through.

"From then on, I had amazing pace, pushed hard every lap to try and manage the tyres and maintain the gap over Stroll, and I managed that until the end. I'm very happy!"

Eric Boullier: "First, I want to pay tribute to Stoffel. This was his second consecutive finish in seventh position, and was a result that demonstrated just how much effort and dedication he's applied to make this work for him.

"Before the start, it was by no means looking like an easy race, particularly as we knew that we would probably be at the mercy of some of the faster cars behind us. So I think we can be proud of all we achieved this weekend, around a circuit that was not best suited to our package.

"Stoffel was the beneficiary of a good start and had the opportunity to run cleanly throughout, but Fernando's race was really compromised by the time he reached the second corner. Through no fault of his own, he was boxed in, and lost position, as an accident unfolded in front of him.

"Despite a strong drive, we weren't able to help him make progress through the midfield, which was particularly full of incidents at this race. But he still did well to come home 11th. I think we have plenty to look forward to when we head to Suzuka next week."

Yusuke Hasegawa: "The Malaysian Grand Prix proved to be another positive result for the team. Stoffel maintained his momentum from Singapore and brought home more precious points, and the result was even more impressive when you consider that this is a tough, power-hungry circuit. I think today we were able to prove the progress of both our car and power unit.

"Stoffel made a good start and was able to keep position until the end of the race. He showed very consistent pace and maintained the gap to his rivals chasing from behind. I think he did a brilliant job all weekend.

"Fernando also had some good battles and overtakes, and it was a shame that he finished just outside of the top 10.

"Overall, it was a decent step forward for us that we could secure points at this potentially difficult circuit. Our reliability was also good throughout the weekend, even in the hot conditions.

"Now we are heading to our home grand prix in Suzuka and I hope we can continue our momentum and give our fans a great race."