Ricciardo aiming for elbows out performance 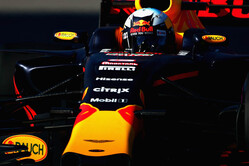 Daniel Ricciardo admits he is unlikely to have many F1 rivals as friends after today's race.

Indeed, following a difficult qualifying performance, which followed a hydraulics failure in FP3, the Australian, who was quickest in both of Friday's sessions, is looking to give a banzai performance.

"If we can get track position then we can help ourselves," he told reporters. "We will be alright, it will be a fun race, but I am not convinced that I will have many friends afterwards!

"But that is okay," he added with a grin. "Why am I confident? Because sixth is shit and we can do better.

"Because I am at the tail end of that pack I need to force my way through," he admitted. "We can't overtake these guys easily so for sure if I am going to move forward it will take some nice moves.

"I have had fun around here in the past overtaking. Some drivers are not too confident with their mirrors. This year they say that visibility is quite bad, so it gives me more of an excuse to go for it.

"It seemed like this morning there was a lot less front grip and a lot more rear grip, so we had a lot of understeer," he continued. "So we couldn't get the front tires or the front grip to work. That was the big difference."

"Yesterday was a good day, and I was realistic, I knew pole was not in the bag. But I thought we could definitely be strong today regardless. So I genuinely think if we got the running this morning it would have helped us out a lot.

"Even looking at the end, like the last lap, it was still a bit of a mess. We are only a tenth or something off Hamilton. I am probably just as frustrated as well at that as well, that we from kind of nowhere we still got pretty close. But in the end not close enough. I think we will find a way to be quick tomorrow."