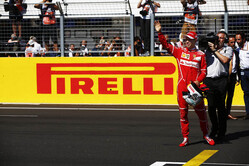 Ferrari driver Sebastian Vettel has claimed pole position for the Hungarian Grand Prix, after a qualifying session that was run from start to finish on the supersoft tyre, which is around 0.8 seconds faster than the soft tyre.

Lap times continued to improve, with the fastest-ever lap of the Hungaroring already set in FP3, and two drivers already breaking into the 1m16s bracket by the end of Q2. They went faster still in Q3, with a pole time of 1m16.276s: nearly 3.7 seconds faster than last year's equivalent. At 4.381 kilometres, the Hungaroring is a short track, so this equates to the biggest time improvement seen so far compared to 2016 in terms of seconds per kilometre.

The most likely strategy tomorrow is for either one or two pit stops, with thermal degradation set to play an important role. Today's track temperatures peaked at 57 degrees centigrade and similar weather is expected tomorrow.

Mario Isola: "The most remarkable thing about today was the margin by which last year's pole time was beaten, with the top six cars setting times of under 1m17s. We had more than 50 degrees of track temperature, opening up the possibility of either one or two pit stops tomorrow depending on degradation rates, which will be assessed during the race."