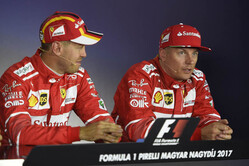 Grid Interviews - Conducted by Will Buxton

First question inaudible.
Sebastian Vettel: ...to have the car in the right window, to have the sun shining, to have people around, that's what it is about, so it was really big fun. Obviously a front row for us, which is incredible and now we are looking forward to tomorrow.

Q: Yeah, no, front row in front of all the Ferrari fans, the flags waving in the grandstands. What changed overnight, between yesterday and today?
SV: Nothing. We are working hard. Obviously the last race wasn't great for us, but it doesn't matter now. We are here and try to do the best and that's what matters. Really step by step and I am very happy with where we are as a team. Again, we need to remember where we were 12 months ago and where we are now. Also thanks to the support, people believing in us. It's great to get the result also on Saturday, but as I said, the main task comes tomorrow so nothing won today but sure we are very happy and take it to move forward.

Q: Kimi, that was a superb lap, absolutely sensational. Listen to all you fans, massive fan base in from Finland. How good did that lap feel?
Kimi Raikkonen: Actually not too good. The start was good and the end was not too bad but in the chicane I braked on the outside kerb and got loose and really threw it away there but you know, it was decent enough for second place but it is disappointing. I felt I had it quite comfortably but you know I couldn't really finish.

Q: Is it too easy to say that this is a track naturally should have suited Ferrari?
KR: If you purely looked at lap times, yes, but then if you look from yesterday it wasn't the easiest day and today we have definitely been pretty happy with things. I managed to improve my car for the qualifying and I must say we are happy with how they are handling now. So far, so good but tomorrow is going to be a long race and a hard battle, so we have to keep it going.

Q: Valtteri, lots of Finnish flags. A great lap, phenomenal job. How hard has it been for you guys to take the fight to Ferrari today?
Valtteri Bottas: They've been quick all weekend and coming into qualifying we knew it should be close and they will be tough to beat and they really had the upper hand today. They had a quicker car, so they have clearly got everything right for this track and we still have work to do on circuits like this, but you know, let's see tomorrow.

Q: Are you guys on the back foot a little bit this weekend?
VB: This weekend, yes, clearly. We can see that we are not performing as we should, as we want, so that just highlights that we still have work to do with the car. But now we are focusing for the race tomorrow, because it's going to a long one and still anything is possible.

Q: Seb, you lead the championship by one point, summer break starts tomorrow. Is it going to be, well, 25 points tomorrow? How big is that gap going to be?
SV: Not by my count: summer break starts on Monday. Not even that, we have the test next week. Numbers... I was decent I would say in maths in school but yeah it's way too early. We go racing; we go flat out. That's what we have been doing for the first races and that's what we keep doing. I think that's the only way to succeed. Certainly we have a lot of boost from people here, at home and in Italy, you know, it can't be better than that and the main thing is to enjoy.

Q: Sebastian, your 48th pole. It looked a pretty seamless session from where we were sitting, how was it for you?
SV: Seamless? Well, it was seamless in terms of we didn't have any problems. I felt quite good straight away from Q1 onwards, we did the laps that we had to do and then come Q3 I was fairly confident... you always debate about small things you can do with the car. I was very happy with the first run. I knew there was still a little bit, so I went flat out on the second attempt and I was a little bit faster, it felt like I was faster, but then I arrived in the last sector and I think I asked a bit too much of the tyres beforehand and lost it, sort of, all in three corners and did the same time. So then I didn't know. I looked up and I didn't know who was coming behind me because there was a bit of time. I was very happy with the first lap. I think the second could have been a little bit better. The car was phenomenal. And then when I saw it was two red in the first two positions then obviously... the same time, simultaneously the radio opened and there was a big scream. So, really nice. Obviously it is only Saturday, so nothing to get from today other than the best position but we did that and it's great I think, especially after... there's always a lot of talk but the talk after the last race was a bit too much so it's good to give the answer on the track. I'm just happy, as I said. I really like the track. The car was fantastic today and it was really a pleasure to just go round.

Q: Kimi, it is a Ferrari front-row lock-out. You came on the radio at one point and said you were unhappy with your braking, so was there more to come from you? Had you been happier with the car?
KR: No, in the end it was OK. Obviously when you lock the front, it's not ideal but there is nothing wrong with anything, it's just you try to always find a better way of driving and doing things, so it's a very normal thing to discuss stuff like that. I was pretty happy with the last apart from going into the chicane, I dropped the wheels on the left kerb and got sideways. I lost an awful lot of lap time. I really felt I had a good chance to put it in first place but anyhow it was decent enough for second place, so obviously great for the team. But it is only Saturday. We have a long way to go tomorrow, both cars, and we try to keep the positions and see what happens.

Q: Valtteri, Mercedes were seeking their third consecutive front row lock-out here in Hungary. It hasn't happened. How surprised have you and the team been by the pace of the guys sat alongside you?
VB: I definitely think today, all-day, Ferrari has been just too quick for us. We saw in the practice the times they were doing: after that we were expecting a tricky qualifying but I think, y'know, it felt like we got most out of it, more or less but just they were quicker today and yesterday it was looking a bit better for us, so, yeah, today was a little bit surprising but it just shows that we definitely have work to do. Tracks like that that requires the maximum downforce of the car, we seem to be struggling a bit more, for one reason or another. So, just need to keep working.

Q: (Peter Farkas - Auto Motor) Sebastian, of course from here the aim must be victory - but you haven't had a clean race since the Monaco Grand Prix. So which is more important: having victory tomorrow or having a clean race at last before the summer break?
SV: Well, if you say the last clean race was Monaco, it ended in a victory so... I don't know. Chances are good, we start at the front, they couldn't be any better but tomorrow is a long day. It's hot, it's always hot here. It's tough for tyres. We saved a set compared to the others. We'll see. I think the race is long and a lot of things to look out for so... yeah. A clean race is a good race and then we'll see which result we get.