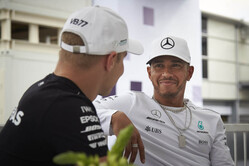 Ahead of today's second practice session, the air temperature is 16 degrees C, while the track temperature is 30 degrees. Typically British and cool, but dry.

Valtteri Bottas headed a Mercedes 1-2 earlier, and in all honesty the only word to describe the German team's performance is 'formidable'.

The pair were almost half-a-second quicker than their nearest rival (Verstappen) and without having to resort to the supersoft rubber.

While Ferrari is said to have its latest engine upgrade here - capable of as much as 10 horsepower more than its predecessor, we saw little evidence of it, both Maranello drivers over a second off the pace. That said, we should get a sneak peek of the potential when the drivers begin their qualifying simulations.

Despite the high cornering speeds on a track which really allows the 2017 cars to show what they can do, there were no incidents of note, though Ricciardo and the Williams duo incurred floor damage after running foul of the "aggressive" kerbs at T9... or Copse as most of us still know it.

Having handed his car over to Antonio Giovinazzi earlier, Kevin Magnussen is back in the Haas this afternoon.

The lights go green and Hulkenberg leads the way, followed by Grosjean and Kvyat. The Russian on mediums the others on softs.

As in FP1, Grosjean has a major wobble in T9, the Haas driver subsequently backing off.

Meanwhile, Hulkenberg gets proceedings underway with a 32.211.

Making the most of the Spec 3 Honda, Vandoorne (supers) goes quickest in all three sectors to post 31.263.

Like the old days, Alonso and Massa trade fastest sectors. The Spaniard posts 30.959 while the Brazilian stops the clock at 30.838.

Sainz spins at Becketts, thereby bringing out the yellows.

On his first flying lap Bottas goes sixth (3.802) as teammate Hamilton heads down the pitlane.

Raikkonen goes quickest with a 29.161 however, Hamilton is on a very quick lap. The Briton subsequently posts 28.780.

Just 16 minutes in and all but Sainz and the Saubers have posted times.

Just prior to Hamilton blistering effort, Ricciardo had split the Ferraris with a 29.822.

Hamilton improves to 28.543 as Verstappen complains of too much understeer. "I can't drive like this," he warns. "Box," he is told. The Red Bull driver is currently seventh, 1.778s off the pace.

It's cool, granted, but wooly hats in the Ferrari garage? Please!

For the first time, Mercedes (Bottas) tries the supersofts. Unsurprisingly, the Finn goes quickest in S1. He's quickest in S2 also, crossing the line at 28.496, only 0.047s quicker than Hamilton's best on the softs.

Talking of Hamilton, the Briton heads out on the red-banded rubber.

Ocon complains that he's losing time in a straight line.

Having gone quickest in S1, a mistake at Becketts means he fails to improve.

"Car might be damaged," warns Hamilton, no doubt having done his floor no good with that off at Becketts. He pits.

"I nearly spun at Becketts," admits Ricciardo, the Australian doing well to keep it all under control. Shortly after Vandoorne spins at the same corner.

The offs are no doubt a combination of the high cornering speeds of the 2017 cars, and stiff winds.