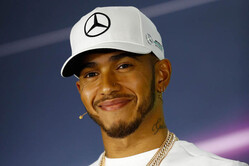 Despite the best efforts of the air conditioning, Lewis Hamilton is set to find temperatures are higher in the media room today than in Mykonos where he spent the last two days on holiday.

While his 19 rivals all attended last nights' F1 event in London, the three-time world champion was holidaying with pals in the Greek Islands.

His absence not only disappointed fans, leading to a backlash on social media, but had F1 bosses and indeed his team fuming, while the media speculated on the cause of the 'snub', at least one publication claiming that his absence, along with his downcast mood in Austria, is due to the fact he's set to get Sebastian Vettel as a teammate.

Whether it was a snub to the event, or the Greek trip was planned months ago, is something we should learn later today when Hamilton - winner of the last three British Grand Prix - faces the media at today's press conference.

The press conference, which has already been given a boost after organisers opted to split it in two, with three participants in the spotlight, will actually feature eight drivers today, with Valtteri Bottas, Romain Grosjean, Jolyon Palmer and Lance Stroll taking part in Pat 1, and Hamilton joined by Daniil Kvyat, Daniel Ricciardo and Pascal Wehrlein in part two.

The second part of the conference will feature Cyril Abiteboul, Mercedes engine guru Andy Cowell and McLaren's Jonathan Neale, one of the few survivors of the 'old guard'.