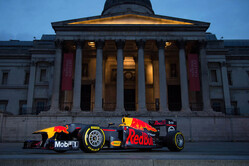 With organisers leaving it until the very last minute before announcing plans for an F1 promotional event in London today, it is understandable that once the official announcement was made it was followed by an assault on social media.

While teams and drivers joined in the spirit of things, telling fans about the event in the heart of the capital, FOM issued its own official video encouraging fans to attend or follow the event online.

With organisers promising that for the first time in history "all 10 teams have come together outside of a race weekend to put on a show for the public", it was noticeable that two drivers were absent from the official video in which even Kimi Raikkonen seemed enthusiastic.

The two drivers missing from the video were Carlos Sainz and Lewis Hamilton, arguably the most popular driver in F1 at present and seeking a fourth successive win at Silverstone.

While Sainz has attended Wimbledon this week, cheering on Rafael Nadal, and will presumably be attending tonight's event, Hamilton was quick to make clear that he will not be there.

"To my loving fans, I can't wait to see you in Silverstone," he tweeted. "Until then, I'm away on a two day break. God Bless you all. Love, Lewis."

In a subsequent tweet, he exclaimed "this is holiday", accompanying it with a video that looked like an outtake from an MTV video.

Neither the Briton's decision not to attend tonight's event or the timing of his tweet - which went out at exactly the same time rival drivers were promoting it - have reportedly gone down well with either FOM or his bosses at Mercedes.

Following last year's victory, the iconic image of victor Hamilton crowd-surfing made headlines around the world, the Briton celebrating with his people - it is the kind of fan-inclusive moment Liberty would desperately love to see repeated this year, especially in light of yesterday's decision by Silverstone's owners to drop the race after 2019.

It was noticeable that for much of the Spielberg weekend Hamilton was clearly down, and while many put this down to the fact that a gearbox change - revealed to the FIA at the beginning of the previous week - had an impact on the Briton, not to mention the fact that he was subsequently out-qualified by teammate Valtteri Bottas and Sebastian Vettel, others wonder if there is more to the three-time world champion's mood... such as news of a new teammate for 2018 perhaps.

For a driver, who makes much of his interaction with his fans, and never misses an opportunity to thank them, the decision to miss tonight's event seems odd, indeed almost deliberate, a situation not helped by the timing of his announcement.