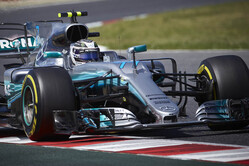 Ahead of today's opening practice session, the air temperature is 14 degrees C, while the track temperature is 21 degrees. It's overcast and 'cool', but not in the modern sense, then again this is Britain... in July. Risk of rain is 10%.

Sadly, it appears to be a case of enjoy it while it lasts, as the F1 drivers have just a couple more years on this track before it falls from the calendar. Or will it.

Despite the best efforts of the BRDC, which has totally emasculated some sections of this historic track, a number of the eye-watering corners still remain, we're talking Copse, Maggots, Becketts. The new breed of F1 car should look might here, as they finally get to show what they can really do. There is talk of some drivers taking Copse flat-out in 8th.

There is only one reserve driver on duty, Antonio Giovinazzi, who isn't in the Ferrari but in the Haas where he is replacing Kevin Magnussen.

While there will be the usual updates, the biggest package is that of Red Bull, a team currently enjoying mixed fortunes. Sadly, for Lewis Hamilton and Valtteri Bottas, is thought to have an engine upgrade worth as much as 10 horsepower.

Then there's the public debut of the Shield, the FIA's proposed cockpit protection device, which will be trialled by Sebastian Vettel in this session.

The lights go green and first out is Vettel with his shield. While the external shots yesterday showed a worrying amount of reflection, the in-car shots show this also. However, the German is more worried about his brakes, warning that "they're very powerful".

After just three minutes all but one driver has ventured out... think London, think Greek Islands.

The cameras pick up on Vettel who is clearly having great difficulty reading his monitor through the shield.

Running thus far has been on the softs and mediums, the supers yet to make an appearance.

Vettel (slowly) climbs from his car, the German looking none too impressed with the FIA's device.

Just ten minutes into the session and there's not a single car on track, silence falls over this particular part of Northamptonshire.

After around seven minutes of nothing, an engine fires up and Raikkonen heads down the pitlane. He is joined by Wehrlein. The Finn is the first driver to use the supers.

In the Ferrari garage, Ross Brawn is discussing the Shield with the team's engineers.

More drivers head out and soon the Red Bulls top the timesheets, Verstappen on 31.771 and Ricciardo 32.389.

The cameras pick up on some carbonfibre flying off Massa's car as he rides the kerbs in T9.

A 30.969 sees Raikkonen reclaim the top spot by 0.802, however whereas the Finn is on supers, the Red Bull duo are on softs.

As Verstappen posts 30.957, Vettel heads out on supersofts. The German subsequently posts 31.805 to go third.

Out come the yellows as Vettel spins at T13. The German reveals that his tyres are now flat-spotted.

Just over 30 minutes into the session, all but Palmer have posted a time.

A 31.265 sees Alonso go sixth, the Spaniard facing further grid penalties this weekend as he reverts to the Spec 3 engine.

As we hit that time when the extra set of tyres have to be handed back, and silence once again descends, Bottas leads, followed by Hamilton, Verstappen, Ricciardo, Raikkonen, Ocon, Alonso, Perez, Kvyat and Vettel. Palmer still to post a time, and ominously the Briton's car is up on its stand.

Taking advantage of the lull, marshals run on to the track to remove the debris following Massa's earlier moment.

"Still early to draw any conclusions," admits Pirelli, "but Mercedes place looks fairly awesome: the only cars in the 1m29s bracket. So far."