Vettel quickest as Mercedes appears all at sea 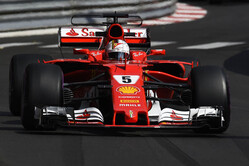 Other than the fact that the top ten were covered by exactly one second earlier, a number of other interesting factors emerged.

Whereas we normally don't see the softest compound until late in FP2, following a brief flurry of activity early on when all three compounds were tried, for much of the time it was the ultrasoft that was the tyre of choice for almost everyone.

We say 'almost' because Jenson Button - standing in for Fernando Alonso - spent much of the morning on softs before finally switching to ultras, while the Toro Rosso duo did most of its running on the supers and never got around to the purple-banded rubber.

Despite that however, the Faenza drivers were sixth (Kvyat) and ninth (Sainz) suggesting that they could spring a surprise.

Despite losing time after damaging his floor, Max Verstappen was on the pace, just behind Lewis Hamilton and Sebastian Vettel, while the Force Indias continue to show strong form.

Only two drivers failed to post a time, Nico Hulkenberg, who had an energy store issue, and Marcus Ericsson whose problem was gearbox related.

And then there are the T-wings, while Renault and Force India have opted for triple-deckers, Red Bull, former critics of the devices, have now chosen to join the club.

The lights go green and Hulkenberg leads the way, followed by Ericsson, Magnussen and Grosjean.

Having completed just three laps apiece this morning, it is no surprise that Hulkenberg and Ericsson are keen to post times, however, of the first wave Grosjean is quickest (16.741). Shortly after, teammate Magnussen posts 14.796

As Raikkonen splits the Haas duo with a 14.839, Vandoorne goes quickest overall with a 14.642. However, the Belgian is on the ultrasofts whereas the others are on the red-banded supers.

AS Raikkonen goes second (14.734), Ocon clouts the barriers at the run down to Portier with the rear of his car. That will not have done the Force India any good.

Palmer is told to stop his car, he subsequently does so, parking up at Portier. Replay shows engine smoke rising from the car moments earlier.

Bottas (supers) posts 20.827 as Verstappen complains of a "I'm getting massive boost on the downshift, which makes me lock-up," warns the Red Bull driver. "It's not right," he adds.

Ericsson clouts the wall coming outside of Casino though the Sauber appears unscathed.

As Force India report no issues with Ocon's car, Verstappen splits the Toro Rossos with a 13.514.

"Tyres are not working that well, taking ages to get up to temperature," says Hamilton having just improves to fourth with a 14.419.

After 20 minutes all but Ricciardo and Vettel have posted times, though both are on track.

A 14.407 sees Bottas go fourth, demoting his teammate in the process.

Having gone quickest in S1, Verstappen gets the Swimming Pool exit wrong and is force to abort the lap.

Grosjean gets it wrong at Mirabeau, bringing out the yellows.

Despite little offs here and there, Grosjean improves to ninth with a 14.056.

A 13.873 sees Hamilton improve from 14th to 8th, thereby displacing his teammate.

A 13.283 sees Raikkonen leapfrog the Toro Rossos to settle into second behind Ricciardo, just 0.003s off the Australian's pace.

In quick succession, Stroll , Sainz and Vettel get it wrong at the chicane, the German having a massive lock-up.

A 12.759 sees Vettel go quickest, the German quickest in the final two sectors. Hamilton, in eighth, is 1.114s off the pace.

Forgive the pun, but Mercedes appears all at sea here.