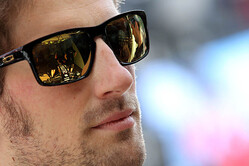 A new kerb at the notorious Swimming Pool complex in Monaco has drivers concerned.

In the build-up to this weekend's race, among the changes announced by the FIA was the fact that the speed bumps across the run-off in Turns 15 and 16 had been removed and replaced by a single speed bump parallel to the track after the kerb on the apex of Turn 16 to a point 3m from the TecPro barrier.

As ever, the move was made without consulting the drivers, and one of the first to criticise the modification was Romain Grosjean who was recently elected as a director of the Grand Prix Drivers' Association.

"I don't really know why," said the Frenchman when asked why he thought the modification had been made, "maybe for the Porsches… but the bigger yellow thing... don't touch it when you are in an F1 car.

"It looks like a taking off ramp," he continued. "If you clip your front wing, it could take it off because you've made a small mistake and it will fly you straight into the wall.

"Before, there was a big one there," he said of the old kerb, "and taking it you were losing time anyway, so I was a bit surprised to see that."

"It is far too big," added Sergio Perez. "I don't think there is a need to have such a big kerb. I think the one we had before was big enough and if you hit it it will send you to the wall. So I think this one will probably send you to the grandstand."