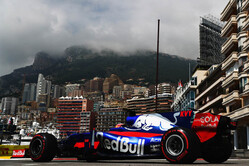 While, due to its unique nature, Monaco doesn't witness anything like the broad range of updates witnessed in Barcelona, in the never ending quest for more downforce and grip the teams nonetheless do like to try whatever they can to improve their chances.

Sadly, the path that a number of teams appear to have chosen this weekend is the horrible T-wing, with Force India and Renault having opted for triple deckers. Indeed, even Red Bull, previously a critic of the device, has joined the club.

However, these ever expanding aero devices aren't the only things attracting attention on a weekend when Jenson Button returns to the fray to replace Fernando Alonso.

While other drivers are getting to grips with the fact that on this twistiest and tightest of tracks the cars are now wider, Button will be experiencing the MCL32 for the first time, his only previous experience of the new regs coming courtesy of the simulator.

Another factor of interest - other than the fascinating title battle between Mercedes and Ferrari - will be the new kerb at the exit to the Swimming Pool complex which a number of drivers have described as a launch pad.

One of the first critics of the kerb was Romain Grosjean, recently elected director at the GPDA. Indeed, the fact the drivers weren't even consulted on the kerb beforehand tells you all you need to know.

The lights have barely gone green than there is a mad flurry of activity as Sainz heads out, followed by Hulkenberg, Vettel, Ericsson, Kvyat, Magnussen and a whole host of others including Button. In moments there are 15 cars on track.

A healthy mixture of all three compounds being used, soft, supers and ultras.

Just three minutes into the session, Verstappen (ultras) posts the first time of the weekend, the Red Bull driver crossing the line at 1:19.424.

While the rest of the field is back in the pitlane, the Mercedes duo head out and moments later Bottas posts 19.611 and Hamilton 22.770. The Force India duo is also on track.

While Verstappen and Bottas fail to improve next time around, Hamilton bangs in a 19.610, the Mercedes duo on supersofts.

Bottas continues to chip away, the Finn posting 15.971 then a 15.408. Elsewhere, as Verstappen heads into the pitlane, his place on track is taken by teammate Ricciardo.

Bottas gets down to 15.111 and Hamilton 15.342 as Verstappen - who returned to the track having opted not to stop at his garage - posts 15.687 to take third back from his Red Bull teammate.

Having split the Mercedes duo with a 15.306, Verstappen gets it wrong at the Nouveau Chicane just moments after Hamilton locked-up there.

Grosjean appears to kick up a piece of debris, but is it from the Haas or from another car?

Button posts 21.765 to go 14th, just behind his teammate. The Briton is on the soft compound.

Verstappen is told he has a "potential right-rear puncture".

As Ricciardo goes quickest (14.884), the cameras pick up on Raikkonen giving the Swimming Pool barriers a little nudge.

Vettel improves to fifth with a 15.606, ahead of Sainz, Kvyat, Magnussen and Raikkonen.

Cars are continuing to miss the apex at the entry to the Nouveau Chicane.

After 25 minutes, all but Hulkenberg, Ericsson, Wehrlein, Massa and Perez have posted times.

Button does a Raikkonen as he too kisses the barriers at the Swimming Pool.

Having abandoned his previous lap just when it looked as though he was going to improve, once again traffic means that Ricciardo has to ease off.

A big lock-up for Raikkonen leaves the Finn with a worryingly large flat-spot.

Sainz goes fifth (15.203), the Spaniard on the supersofts as a time the pace-setters are on the purple-banded rubber. He subsequently improves to third (14.983).

Teammate Kvyat - also on supers - is currently 8th (15.458). The Russian subsequently improves to second with a 14.640 - superb stuff from the Faenza duo.