Wehrlein hits out at critics 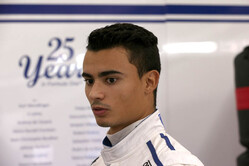 Back in the Sauber for the Bahrain weekend, Pascal Wehrlein has hit out at his critics.

Following his horrific crash in the Race of Champions in January, the German was ruled out of the first week of pre-season testing in Barcelona. In Melbourne, feeling he was still not fit enough to complete a full race distance, he withdrew on the Friday evening, meaning that Sauber had to call on the services of Ferrari reserve driver Antonio Giovinazzi, who had also deputised for Wehrlein in Barcelona.

While Wehrlein's absence from the Barcelona test was put down to his Race of Champions crash, his withdrawal in Melbourne led to widespread speculation, both in the media and among fellow drivers, with some claiming that perhaps his injury was worse than first thought, and others claiming he had let his team down and should 'man up'.

Back in the C36 for this weekend's Bahrain Grand Prix, the German, who was keen to set the record straight.

"I don't care too much what the others say because they didn't know my situation and they were commenting on my situation," he told reporters. "For me it was the right decision, together with Monisha and with Toto, and what the other drivers think is their stuff.

"If you don't know what injuries someone had then you shouldn't criticise them," he continued. "It's quite simple: if the injury was just some muscle pain, do you think Sauber or Mercedes would accept me to not drive?

"One broken bone is not something that is very easy to catch up in one and a half weeks," he insisted, "and I had three broken vertebrae.

"Of course, you feel something," he said of the injury, "if something was broken before, you feel it for a longer time. But medically everything is good. It's just the muscles around the bones that were fractured, they went away if you can't do sport for a few weeks, but they are rebuilding quite quickly as well.

"I'm quite positive," he concluded. "I think I will be fine in the car, no pain. The track is also quite flat, not many bumps."