Raikkonen: It's too early to say 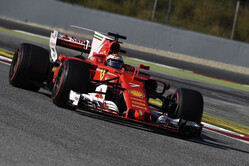 As Lewis Hamilton and Sebastian Vettel each insists that the other is not fully showing his hand, Barcelona pace-setter Kimi Raikkonen has added his two-penn'orth.

Having been tantalised over the last couple of days as drivers edged ever close to the 'magical' 1:18 barrier, the Finn finally went out and kicked the door down.

Having teased with a 19.019 on the supersofts, the Ferrari driver finally put us out of our misery with an 18.634. When he fitted a set of ultrasofts shortly after, the F1 world held its breath, but like countryman Valtteri Bottas, the Finn was unable to improve with the purple banded tyres.

It was a fitting conclusion to a test which had seen a couple of mistakes from the 2007 world champion, not least the off on Wednesday which resulted in damage to the SF70H.

He now heads to Melbourne, along with teammate Sebastian Vettel, who was second fastest in pre-season testing, looking in good shape but giving little away.

"There's a good feeling with this car and that's the most important thing," he said. "We have been reliable for almost all of these days of testing and that is another good sign of the great work the team has done over the winter.

"We are starting from a stronger base than last year," he continued, "but it's really too early to say how fast the car is compared to the others. Perhaps even Melbourne won't give a 100 per cent precise picture of the situation, because the first race is always a bit unusual. We might have to wait until China.

"Either way I'd like to thank everyone in the team, because they have always managed to step in and sort out all the small problems that testing is supposed to resolve."

Shortly after the spin which resulted in the fifth red flag stoppage of the day, news filtered through the paddock that the legendary John Surtees, winner of the 1964 world championship with Ferrari, had passed away. Raikkonen was quick to pay his respects.

"I met him a few times, he was very easy-going and it was very easy to get on with him," he said. "You could tell that he had passion for racing in his blood. This is sad news and my thoughts are with his family."

Perhaps the best way to mark 'Big John's' passing might be to kick the season off with a win in Melbourne, a prospect that is highly unlikely as far as another racing name he was greatly involved with is concerned... Honda.