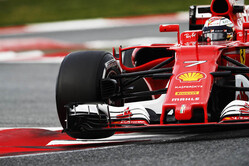 As Hamilton and Vettel insist that the other's team remains the threat... Kimi Raikkonen throws down the gauntlet.

Not only was the glove (read gauntlet) removed this morning, it was well and truly thrown down… and then some.

Having somewhat spoiled his copybook on Wednesday with a couple of spins, the second of which damaged the SF70H, this morning Kimi Raikkonen more than made up for it by pulling out all the stops and posting the fastest time of pre-season testing.

An early pace-setter, the Finn then sat back as others, including Nico Hulkenberg and Max Verstappen took centre stage, before heading out on supersofts.

Yet still, there is doubt as to whether he had more in reserve, for on an earlier lap that took him to the top of the timesheets, Verstappen was quicker in the final sector, while the Finn clearly held back. Furthermore having remained on track after his fastest lap, it was clear the Ferrari was not running on fumes.

Interestingly, like countryman Valtteri Bottas, Raikkonen was unable to improve his time when running on the supersofts.

Though 0.804s off the pace, Verstappen has nothing to be ashamed of, the youngster posting the fastest time seen in a Red Bull thus far having not posted a time until almost two hours into the session, the team focussing on aero tests and short runs..

One gets the impression that Bottas is leaving the fast stuff to Lewis Hamilton this afternoon. The Finn's best lap was good enough for fourth, and his 53 lap tally took Mercedes well beyond the 1,000 lap mark for the tests.

Carlos Sainz was third, while Nico Hulkenberg - in the Renault sporting a new rear wing - was fifth, once again the German appearing to avoid the issues that have continuously compromised his teammate.

After the race sims of yesterday and all the medium tyre running, Lance Stroll was allowed to stretch his legs a little, the youngster responding with a time good enough for seventh.

Sergio Perez and Marcus Ericsson both had productive mornings, though the Mexican will be worrying about the pace of fellow midfield runners Toro Rosso, Renault and Williams.

Romain Grosjean was the cause of two of this morning's red flags, the first following a spin and the second due to a technical issue. The Frenchman finished the morning eighth, 2.79s off the pace.

It goes without saying that the two remaining red flags were for Fernando Alonso, or rather the McLaren-Honda.

The first, just over two hours into the session, was when he stopped on track (Turn 9), the second around forty minutes later when the car ground to a halt just after leaving the pits.

As if to rub his nose in it, around the time of the first stoppage, Mercedes was tweeting about its 1,000 laps.

It's just as well that McLaren is not holding any press conferences with its drivers tonight - for logistical reasons, don't you know - for one wonders what the Spaniard might say. Certainly, after the second stoppage, as he walked away from the stricken MCL32, his body language spoke volumes.

Honda later revealed that Alonso had suffered the same issue that Stoffel Vandoorne encountered yesterday, an "intermittent electrical shutdown"., which is no doubt comforting for the two-time world champion.

"Various electrical components in the PU and chassis were changed overnight," said Honda, "and the team are making further changes to eliminate variables and identify the source of the problem."

Sadly, we were hearing all this a week ago. Indeed, as others are carrying out race simulations, the most laps McLaren has strung together is 11.

However, as bad as it is for Alonso and the guys at Woking, Raikkonen and Ferrari have served notice that the Italian team is up for the fight.