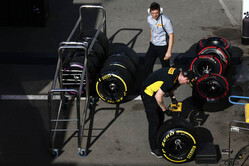 Pre-season testing has now concluded, with all the teams taking part in the second four-day session this week and completing plenty of running. The fastest time of the latest session (and the whole test) was 1m18.634s, set on the final morning by Ferrari driver Kimi Raikkonen, using the P Zero Red supersoft tyre.

Unlike last week, there was no wet session during the second four-day test, meaning that the teams concentrated exclusively on the slick tyres from start to finish.

Mario Isola, Head of Car Racing: "During the eight days of pre-season testing, we've fulfilled most of the objectives that we had targeted. This week we confirmed the results of last week's test, particularly with regard to the fast recovery of the tyres if they overheat, which was a particular wish of the drivers for the 2017 compounds. Compared to the general work we saw last week these last four days were more geared towards performance and race simulation in preparation for the season ahead.

"While the cars are yet to perform at their maximum potential, we saw the fastest-ever lap of Barcelona in the circuit's current configuration this week, beating last year's pole by more than three seconds and the 2015 pole by more than six seconds.

"The target of being five seconds faster than the 2015 times in Barcelona was already met last week and now that benchmark has been lowered further. Considering that many of the best times were set on compounds that are not particularly suited to Barcelona, and that the cars are sure to evolve rapidly over the course of the season, this indicates the phenomenal potential performance of the new generation of Formula 1, which we can say produces the fastest cars that the sport has ever seen."