Ecclestone: It's official, I am gone 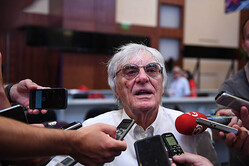 Bernie Ecclestone has revealed that he has been deposed as CEO of the Formula One Group.

The Briton's role in the sport after more than forty years in charge was always in doubt as Liberty Media sought to take control, and today the 86-year-old confirmed that he is no longer in charge.

"I was deposed today," he told Germany's Auto Motor und Sport. "I am simply gone. It's official, I am no longer the leader of the company, my position has been taken by Chase Carey.

"My new position is one of those American terms," he added. "I'm now like an honorary president, I don't even know what it means.

"My days in the office will be getting quieter now," he admitted. "Maybe I will attend a grand prix sometime in the future, I still have many friends in Formula 1 and I still have enough money to afford to attend a race."

Asked if he will expects to retain his place on the World Motor Sport Council, Ecclestone, who still holds shares F1's parent company, said: "I doubt it. I will have to talk to Jean Todt about this."

The Briton's 'deposing' comes just days after the American company cleared two more hurdles in its bid to buy the sport, first getting the approval of its shareholders and then the blessing of the FIA.

While it was anticipated the purchase would be complete by the end of March, it is clear that Liberty is eager to get things wrapped up as soon as possible.