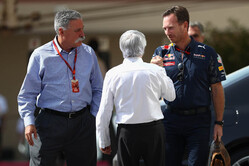 Liberty Media is to set aside $400m shares in F1 in the hope that the teams will purchase them.

"We think it's important to offer the teams the chance to invest in F1 and further align our interests," said Greg Maffei, Liberty's President and Chief Executive Officer, of the move. "We look forward to working with the teams to increase the appeal of this iconic sport and enhance the F1 business."

"Several of the teams have expressed interest in investing and we have already begun productive discussions to make the sport more competitive and even more exciting," added F1 Chairman, Chase Carey.

The aggregate number of shares to be issued at the F1 closing will not change as a result of this transaction," said Liberty.

Only the allocation of the 138 million shares will change as follows: approximately 57 million to the Selling Shareholders, 62 million to the third party investors and 19 million into treasury.

To the extent such shares are not issued to the F1 teams within six months following the closing of the acquisition, which is expected to occur this month, the shares will be retired.

If the acquisition of F1 is not completed, Liberty will use the net proceeds from the offering for general corporate purposes, which may include capital expenditures, acquisitions, working capital, repayment of debt and repurchases of common stock.

Pending the completion of the F1 acquisition or other such uses, Liberty intends to invest the net proceeds in cash equivalents or short-term investments.

However, it is understood the teams have declined the offer as the shares, which would have to be retained for ten years, would not come with any voting rights - and we all know how F1 teams like to vote on everything.

"Without influence on the future direction and marketing of Formula One, buying shares is not very attractive for us," a source was quoted as telling Auto Motor und Sport, who reported that there was "little interest" from the teams who "politely declined" the offer.

The offer comes at a time one team is in administration and two others, Sauber and Force India, have lodged complaints with the European Commission in respect of how the sport is run and the prize fund allocated.