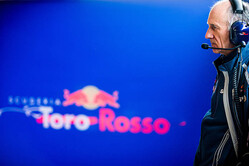 Toro Rosso boss quick to throw his support behind Liberty's plan for a budget cap.

It is a topic which has divided the sport for as long as anyone can remember, and one which on a couple of occasions has threatened to tear F1 apart as teams sought to start their own championship in reaction to the FIA’s demands.

Keen to develop a show which will mean more races and more teams, Liberty Media, F1's prospective new owner, is eyeing the idea of a spending cap.

Quite rightly it argues that the spending gap between the haves and have nots has created a chasm that can never be closed while those teams that have the money are allowed to spend whatever they want, leaving the lesser funded teams to fight for the remaining scraps.

As in other sports it leads to several tiers, with those with the biggest budgets enjoying the most success.

In Formula One, teams such as Force India and Sauber have long argued not only for a limit on spending but also a more equal division of the prize pot, hence their complaint to the European Commission.

However, teams such as Haas would also benefit from such a cap, as would Manor, which in a previous incarnation was encouraged to enter the sport on just such a promise.

Should Liberty go ahead with its plan and seek to introduce some form of cap, the move will surely lead to further division in the sport, however, one team boss who is in favour of the idea is Toro Rosso's Franz Tost.

"Give each team, for example, 150 million euros with the FIA watching over it," he told Austria's Tiroler Tageszeitung. "The big teams will cry foul, that there is no way to control costs but this is nonsense. Over at Toro Rosso, I know how much each screw costs.

"Many claim you cannot control it," he continued, referring to the policing of teams' budgets, "nonsense as well… if somebody doesn't want to present their expenditures, it could be pretty easy: then the FIA could charge this team twice the average price of the part in question. Then you'll see how fast all invoices would be filed with the FIA.

"We need to reduce the costs," he insisted. "It shouldn't be that a team spends 450 million euros a year. On the other hand, we bargain for a few cents when it comes to road cars. Even the manufacturers cannot accept sums like this forever. It's not feasible. We spent way too much money on F1."