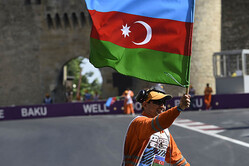 The 2017 Formula One World Championship will consist of 20 rounds as the World Motor Sport Council confirms that Germany has been dropped from the schedule.

With the future of the Canadian event now secured, only the Brazilian round seems in doubt, the race, though almost certain to go ahead, still featuring the ominous 'to be confirmed' asterisk.

The calendar issued today sees a number of changes to the version issued in September, the most notable change being the race in Baku, Azerbaijan, which has been moved forward a week and will now not clash with the Le Mans 24-hour race. Furthermore, it will no longer form a back-to-back with Canada.

Moving the Baku event means that the Austrian/British back-to-back events have been moved forward a week, the 16 July round at Silverstone now clashing with the men's final at Wimbledon.

Also affected by the Baku move is Hungary, which will now take place on 30 July.

Malaysia and Singapore have now been switched with Malasysia now forming the first part of a double header with Japan as it looks set not to renew its contract when it ends in 2018.

While the original intention was to host the Mexican and Brazilian rounds back-to-back, the former event has now been moved back a week to pair it with Austin as was the case this year.

Once again, the season will conclude in Abu Dhabi (26 Nov).