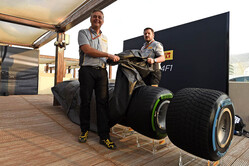 The entire range of 2017 size F1 tyres have been presented in the Yas Marina paddock at the Abu Dhabi Grand Prix, together with a first look at the new tread pattern for the Cinturato intermediate and wet tyres.

As a result, the 2017 tyres are around 25% wider than the current tyres. This applies to the intermediate and full wet tyres as well as the slicks.

Thanks to a change in FIA sporting regulations, development of the new 2017 tyres has taken place over 10 sessions, making a combined total of 24 cumulative days of running. The test programme using individual mule cars began in early August, with the latest test concluding last week at Abu Dhabi with Ferrari.

On the Tuesday after the Abu Dhabi Grand Prix (November 29) the three mule cars from Ferrari, Mercedes and Red Bull will all be seen on track together for the first time.

The three teams each provided a modified 2015 car that has been adapted according to specific technical directives from the FIA in order to simulate next year's regulations, with more downforce, a wider track and wider tyres. Each car has so far completed seven days of running (as detailed in the test calendar) with the work equally split on slick tyres in all the different compounds as well as intermediate and wet tyres.

The November 29 test day at Abu Dhabi will be the eighth day of running for each of the three teams, making up a cumulative total of 24 days that completes this year's development programme agreed by the teams, the FIA and Pirelli.

Pirelli is satisfied with the results obtained to date, despite the obvious difficulties that the teams have faced in modifying their 2015 cars in order to exactly simulate the performance expected next year. 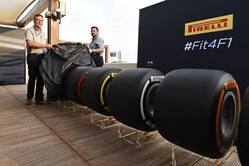 While they have delivered an increase in downforce compared to current cars, the mule cars are still some way from the real performance of the 2017 cars, which will influence the way that the compounds behave in particular. A number of these compounds, designed with a new philosophy and new materials, have already begun to meet the targeted objectives: lower degradation and greater resistance to overheating, allowing them to consistently maintain an optimal level of grip. But all these results will be validated at the start of next year in representative conditions. One complication comes from the fact that some European tests have been run in cold conditions and rain, limiting the relevance of these tests.
Development will in any case continue throughout 2017 to deliver the improvements that have been requested, based on data obtained during races, and supply a further evolved product in 2018.

All this has been discussed and agreed with the teams, with whom Pirelli is already working to define a new test plan for next season.

Paul Hembery, Pirelli motorsport director: "I'd like to thank all the teams that have allowed us to develop our new wider tyres for 2017, using their mule cars. We've made huge steps forward since trying the new tyres out for the first time at the beginning of August and we're pleased by the results obtained with the majority of the specifications. We know however that the work is just beginning. The aerodynamic progress made by next year's cars will lower lap times by around five seconds compared to 2015, and about three seconds compared to this year. The new cars that will take to the track for the first time in February will have a downforce increase of more than 20 per cent: much more than we have seen with the mule cars. And that progress will continue throughout the whole of next season. So the next phase of our development, aimed at 2018 when the cars will be faster still, already begins in February."

Check out our Thursday gallery from Abu Dhabi, here.