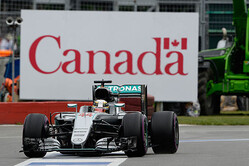 The Mayor of Montreal, Denis Coderre, took to social media today to confirm that the 2017 Canadian Grand Prix will go ahead.

The Montreal event, popular with fans and drivers alike, was one of three events ominously marked 'subject to confirmation' when the provisional calendar was released last month.

While there remains doubt over the future of the other events, in Germany and Brazil, the Mayor announced the Montreal event will go ahead. "There will be a Grand Prix of Canada in 2017," he tweeted.

Shortly after, organisers Octane Racing Group confirmed the news with a brief statement.

"Montreal and Circuit Gilles-Villeneuve produce one of the most exciting Grands Prix of the season," it read. "In 2017, everyone will have even more good reasons to be there since we’ll be celebrating the 50th anniversary of the inaugural Canadian Formula 1 Grand Prix."

"Formula One, for me, is extremely important and it's one of the essential major events that make up Montreal," Coderre subsequently told reporters.

While there was the inevitable question of money, the main problem holding up negotiations was the failure to carry out the requested updates to the circuit's facilities, namely the control tower, medical unit and garages.

In 2014, race organisers agreed a new 10-year deal and also assured FOM that the required updates would be carried out in time for the 2017 event. However, with the updates now not expected to be complete until 2019, The City of Montreal has had to negotiate a compensation package with FOM.

Tickets for the event, scheduled for 11th June, go on sale on Thursday.