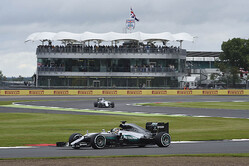 The British Grand Prix "will definitely" be dropped by Silverstone as it is "unaffordable" according to an article in The Sun by Christian Sylt who quotes a senior source close to the track.

The past 12 months have not been good for Silverstone. Jaguar pulled out of a bid to buy the track, while Ginetta owner Lawrence Tomlinson, following multiple extensions, saw the BRDC fail to accept his bid within the final deadline. Then there was the unexpected (and unexplained) departure of Silverstone boss Patrick Allen. The British GP even attracted 1,000 fewer spectators despite Lewis Hamilton looking for his fourth title.

But the really bad news has intensified in recent weeks. Last month John Grant, chairman of Silverstone's owner, the British Racing Drivers Club (BRDC), sent a letter to members revealing that it "is considering whether we should give notice before the 2017 BGP."

Silverstone has a contract to host the British GP until 2026 but can give two years of notice if it wants to pull out. Confirming that the race is unaffordable Grant added that "without some change in the economic equation, the risk and return are out of kilter."

F1's boss Bernie Ecclestone has a special agreement with the BRDC which sees it get a share of his corporate hospitality income at the British GP whilst the hosting fee for the race only rises by 5% annually, compared to 10% for most tracks. However, the BRDC still made combined net losses of £47.6m over the five years to the end of 2015 as it is the only one of F1's 20 race hosts which doesn't get any government support. It has driven the BRDC to do the unthinkable and drop the race according to a senior member of the club.

"They will definitely drop the Grand Prix and see what is going to happen over the next two years. It's a two year notice period. They will have to give notice. There is no question about it because it is not affordable," says the source.

The view on the record from the BRDC isn't much more positive. The good news is that the British GP is guaranteed to take place at Silverstone until the end of 2019 as the earliest that the track is allowed to give notice is this year. However, talking last week, the BRDC's president Derek Warwick didn't give any guarantees that the race would remain at Silverstone after that and said "I have just got a feeling that we can't do without the British Grand Prix, we can't do without Silverstone."

The British GP is the oldest F1 race and was the first on the calendar when the championship started in 1950. Silverstone has hosted the race since 1987 but has fallen on hard times in recent years as the hosting fee accelerated to its current level of around £17.7m.

The BRDC comprises 850 racing personalities including Jenson Button and Lewis Hamilton but they don't have to fund Silverstone. Warwick, said last week that he is "talking to the government to see if there is any help there" and added that the BRDC has already met F1's new owners Liberty Media to discuss Silverstone's predicament. It remains to be seen whether they will be prepared to cut the track any more slack than Ecclestone has already done.

Ecclestone says he has two other locations lined up to take on the British GP if Silverstone does indeed put the brakes on it. A race on the streets of London has long been rumoured but would have so much red tape to swerve around that it seems incredibly unlikely. Brands Hatch too was hampered by planning permission hurdles when it hoped to host the British GP in 2002.

The most likely alternative could be Donington and although it has only hosted one F1 race it was one of the most memorable in history thanks to Ayrton Senna's commanding performance in torrential rain at the 1993 European GP.

Donington was bought last week by Brands Hatch owner Jonathan Palmer whose company Motorsport Vision has also made a bid for Silverstone. It shows that Palmer has a proven interest in hosting the British GP and he has the credibility and experience to make a go of it. However, Donington is still suffering from a failed bid to host the race in 2010 when Silverstone previously looked shaky. Time will tell whether it has to step into the breach again.