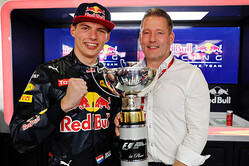 For those without the time - or the inclination - to check out the Pitpass end of season podcast, we thought you might still be interested to know what the team; Mat Coch, Max Noble and editor Chris Balfe, thought of 'Season Past'.

Then again, with so much rubbish on TV over the holiday, or forced to spend time talking to friends and relatives you're already bored to death with (after half-an-hour) what better excuse to disappear for just over an hour.

Anyway, Mat Coch came up with the categories, and unlike last year the team didn't share their nominations in advance.

On the other hand, showing his customary failure to ignore team orders - a rare thing in F1 - editor Balfe, in most cases, only names one choice in each category instead of the customary three.

Overtake of the year

3rd: Daniel Ricciardo for numerous passes over the course of the season

3rd: Daniel Ricciardo for his numerous passes over the course of the season.

Personality of the year

Race of the year

Brazil with an honorary mention to Baku which for some reason wasn't named best organised race of the year.

Memorable Moment of the Year

2nd: Anytime Nico and Lewis got close to one another

3rd: Fernando Alonso in Brazil (keepy-uppy, the deckchair and then the camera work

2nd: Sebastian Vettel, Lewis Hamilton and the seagulls in Canada

Innovation of the Year

2nd: Bernie Ecclestone for his numerous ideas - all of which should be ignored

Team of the Year

Driver of the Year