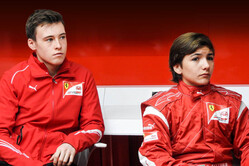 The youngster, who was born in July 2001, contested the majority of the Ginetta Junior Championship this year having impressed in karts.

Enzo's grandfather Emerson is a two-time F1 World Champion and Indianapolis 500 winner, whilst his uncle Max Papis and cousin, Christian Fittipaldi, both competed in F1.

Also signed up to join the FDA from January is Kiwi Marcus Armstrong, who was born in July 2000.

A Tony Kart factory driver who made his single-seater debut this year contesting rounds of both the Formula Renault NEC and Formula Renault Eurocup, Armstrong also contested the BRDC British Formula 3 Autumn Trophy.

Both were recruited to the FDA following an evaluation test at Fiorano in November.