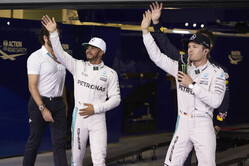 While the rest of the F1 world was left open-mouthed, Lewis Hamilton says Nico Rosberg's retirement doesn't surprise him.

Maybe that's because the German had already told him.

"I informed Lewis myself before this, it is the right way to do it," revealed the German at the FIA Prize Gala in Vienna, moments after delivering the biggest shock of the F1 season.

"We had so many battles and so many moments," he continued, "so I thought it correct to let him know of my decision and especially in light of his post yesterday, which was kind of him. Maybe we can have a discussion tonight."

The post Rosberg referred to was that tweeted by Hamilton on Wednesday evening when the Briton accompanied a picture of the two chatting and smiling during their teens with the message: "We said we'd be champions back then, now we both are! Congratulations Nico, you did everything a champion needed to do. Well deserved"

Suspicions that the tweet was more the work of the Mercedes PR machine than the Briton himself, were given credence by Hamilton's comments in the wake of today's announcement.

"The sport will miss him but I wish him all the best," he said. "I am sure it is a surprise to many people. I am probably the only person who thought it was not a surprise because I've known him a long time, but this is motor racing.

"This is the first time he has won in 18 years," he continued, a classless comment that does Hamilton no favours since he is clearly not only referring to Rosberg's F1 career, "hence why it was not a surprise that he decided to stop. He's got a family to focus on, and wants more children, and F1 takes so much time.

"Will I miss the rivalry? Of course," he added. "We had always talked about being champions and when I joined this team and Nico was there, which is also something we talked about when we were kids. It is definitely something very strange and it'll be sad to not have him in the team next year."

Asked if he will seek input in terms of who takes the German's seat, he didn't appear too bothered, possibly because the biggest threats are locked into almost watertight contracts for next season.

"If they want to talk to me, they can talk to me about it," he said. "It should be someone who has to work well in the team. There will be stronger characters and less strong characters and some drivers who take alternative routes in order to deal with competition. There will be good and bad ones out there, for sure, I would be more than happy to help with that analysis. I just always asked to have equal rights. As long we're treated fairly, it doesn't really matter who is alongside you.

"Of course, we've got great team bosses who I'm sure will choose the right people to be representing the brand," he concluded. "I'm interested to see who would want to be my team-mate and respect anyone that would want to."