Wolff: No decision on Hamilton 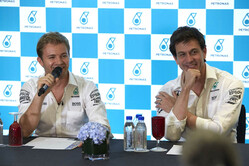 Toto Wolff admits he has yet to decide how to handle situation with Lewis Hamilton.

Touring his team's major sponsors and Mercedes own facilities in a whirlwind cycle of celebration with his new world champion, Nico Rosberg, team boss Toto Wolff admits he has yet to decide how to deal with Lewis Hamilton's blatant ignoring of team orders on Sunday.

The Briton's actions, not for the first time, have polarised opinion in terms of race fans and the inhabitants of Planet Paddock, though most drivers tend to side with Hamilton.

Having previously accused Hamilton of "anarchy" in terms of his refusal to obey the orders of engineer Pete Bonnington and then technical chief Paddy Lowe, 48-hours later Wolff's mood appeared to have eased.

"I have not made up my mind," he said at a press conference when asked what sanction Hamilton might expect, if any.

"I can understand why he drove the way he drove, it was his instinct," the Austrian admitted.

"He needed to do it," he added. "Our system has made them win many races, but has also created that air of dominance, but again, let's discuss at a later stage."

Meanwhile in a further twist, Hamilton pulled out of today's tyre test at Abu Dhabi after just a couple of laps, a team spokesman claiming that the Briton was "unwell".

Hamilton previously felt "unwell" and was unable to take part in tyre testing at Barcelona just days after the Japanese Grand Prix, the event where he whipped up a media storm by playing on Snapchat during the Thursday press conference and subsequently refusing to talk to the media.

The FIA was swift to act, drafting the Briton in for the subsequent press conference in Austin to make amends.

And let's not forget that - oh so quickly denied - claim from Niki Lauda that Hamilton trashed a hospitality suite after crashing out of qualifying in Baku and having to start from the fifth row.