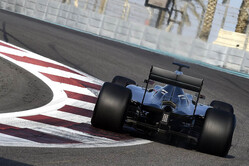 Lewis Hamilton pulled out of today's tyre test in Abu Dhabi after just a couple of laps.

While wags will insists that the Briton is still sick that teammate Nico Rosberg won the title on Sunday, Mercedes was unable to say exactly what Hamilton is suffering from.

"Pascal was on standby. Lewis felt unwell so Pascal took over," was all a team spokesperson would say.

With Rosberg on promotional duty following his title success, Pascal Wehrlein took over from Hamilton on the last day of testing of the 2017 tyre before pre-season testing gets underway in February.