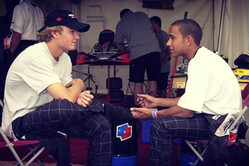 As the furore over his tactics during last Sunday's Abu Dhabi Grand Prix continues, Lewis Hamilton has paid personal tribute to teammate Nico Rosberg on his title win.

Alongside a picture of the pair chatting and smiling during their teenage karting years, the Briton tweeted: "We said we'd be champions back then, now we both are! Congratulations Nico, you did everything a champion needed to do. Well deserved"

The post comes as Rosberg’s whirlwind celebratory tour continues and at a time Mercedes boss Toto Wolff is still deciding what action, if any, should be taken against Hamilton for ignoring team orders last Sunday.

Whether it is the ongoing furore that prompted Hamilton to act, or whether Mercedes has had a quiet word with the Briton in an attempt to calm the situation, the fact that he accompanied his tribute with a picture he had kept reminds us all that the relationship between the pair hasn't always been as contentious.

In the aftermath of Sunday's race, it is understandable that Hamilton was loath to lead the celebrations for his teammate, but perhaps after a few days and in the light of comments made by Rosberg, including citing the Briton as one of the best F1 drivers "of all time", perhaps the three-time champ has softened.

After all, few would bet against the Stevenage Rocket adding to his tally.