Rosberg: It will always be difficult between us 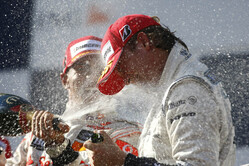 Cast your mind back to Melbourne 2008.

In the ante-room before heading out on to the podium, Lewis Hamilton and Nico Rosberg hugged and giggled like schoolboys.

For the Briton, it was his first win of his second season in F1, a season which would see him claim the drivers' crown for the first time.

For the German, now in his third season with Williams, it was his first F1 podium.

The pair, who had known and raced one another for many years, hugged and jumped up and down in delight, as they shared their first F1 podium together.

Eight years down the line and as Rosberg stood on the podium having won the 2016 world championship, Hamilton could barely raise a smile. As was the case so often throughout the season, eye contact was kept to the minimum, the atmosphere bordering on uncomfortable.

It's hard to say exactly when it all went wrong, but for the German, certainly, Austin 2015 was a tipping point. Passed by his teammate in the closing stages of the race following a mistake, a move which sewed up the championship for Hamilton, Rosberg later blamed his error on a "gust of wind".

In the ante-room, Hamilton's third title now won, there were no hugs or giggles instead, when Hamilton tossed the 2nd place podium cap to the German, Rosberg threw it straight back. If there were any lingering doubts about the animosity between the pair, that brief moment brought home the reality of the situation.

Despite Hamilton's claim earlier this year that the pair remain friends and often spend time chatting in the swimming pool at their Monaco apartment - a claim dismissed by Niki Lauda – the situation has further deteriorated.

On a visit to his home town of Wiesbaden for a civic reception in honour of his world championship win, Rosberg talked of his relationship with Hamilton.

"Lewis is one of the best of all time," he told reporters. He sets a high standard.

"It will always be difficult between us," he admitted. "We are in the same team and race against each other for titles. Therefore it is virtually impossible to have a good relationship.

"We used to be best friends when we were young so at least we have this respect for each other," he added. "This helps somewhat.