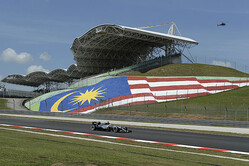 As if he didn't already have a pretty good idea, Toto Wolff has admitted that it was the late race engine failure in Malaysia that cost Lewis Hamilton the 2016 world championship crown.

Leading the race and thereby about to close Nico Rosberg's title lead down the just one point, there was a groan from the Briton when his engine failed 40 laps into the 56 lap race.

He subsequently strung together a sequence of four race wins at the end of the season, yet Wolff believes that ultimately it was the Malaysia failure, rather than the earlier issues and botched starts that cost Hamilton his fourth title.

"This year, clearly Malaysia cost him the championship," said Wolff, according to Autosport.

"You need to win and to lose with dignity," he continued. "This is a mechanical sport, if they sat on the floor on the starting grid they wouldn't go far. This team has built them the best car over the last three years and has made them win races and championships. This team has let them down on occasions... fewer occasions letting them down than the ones they can celebrate."

However, clearly tired of Hamilton continuing to dominate proceedings, Wolff said that the Briton's issues shouldn't undermine the achievement of his teammate.

"We've been spending the last ten minutes on Lewis and this situation without recognising Nico and his achievements," he said. "Racing against the most talented driver as a teammate and winning a world championship and making it close the years before is quite an achievement.

"We should honour that, because he is a tough cookie and he doesn't let go. There is quite some remarkable character traits about him that make him a world champion and a worthy world champion."