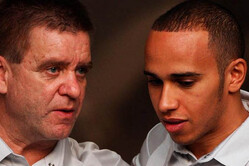 McLaren has paid tribute to former team doctor Aki Hintsa who has passed away.

It was with deep sorrow that we heard the news this morning that Dr Aki Hintsa had died.

Aki had been fighting cancer with extraordinary courage in recent months, his indomitable spirit an inspiration to all who crossed his path.

His last appearance at a Grand Prix was at Monza this year, where his warm smile and infectious chuckle were very much in evidence, despite the battle that was being waged within his newly slight frame.

He first joined McLaren back in the days of Mika Hakkinen and Kimi Raikkonen, with both of whom he developed a powerful rapport, working with them not only to improve their physical fitness but also to help them develop the mental and emotional strength to translate their mercurial talents into the disciplined performances that would result in many grand prix wins for McLaren and, in Mika's case, world championships in both 1998 and 1999.

Aki worked with similar success with the drivers who followed in Mika's and Kimi's McLaren wheeltracks, and grew particularly close to Lewis Hamilton. Undoubtedly, Aki played a crucial role within Lewis's inner circle during his time at McLaren, and it was often to Aki that Lewis would turn first in times of stress. Equally, no-one was more thrilled than Aki when Lewis won the 2008 world championship for McLaren with an overtaking move that has since passed into racing folklore, on the last corner of the last lap of the last race, in Brazil, where Aki's trademark warm smile and infectious chuckle were replaced by exuberant high-fives, muscular bear-hugs and indecipherable whoopings in his native Finnish.

First and foremost, Aki was a doctor. Prior to arriving in Formula 1 he had practised medicine in many parts of the world, particularly in poverty-stricken and war-torn parts of Ethiopia in the 1980s and 1990s, where he worked as a missionary-cum-medic and combined his magnificent qualities as an inspirational leader with great medical expertise and an ability to improvise in dreadfully difficult conditions, often requiring considerable physical bravery and enormous mental fortitude so to do. In his uplifting book 'The Core', published last year, he told for the first time a multitude of stories that surprised even those Formula 1 friends who had known him well for many years. Such was Aki's modesty that he had never boasted about his life in Africa, or indeed the fact that before that he had started out as a first-class ice hockey player in his native Finland.

'The Core' is more than an autobiography, however. It is also a profoundly intelligent self-help book. In it Aki urges his readers to ask themselves the questions that most busy people never stop to consider. Who am I? What do I want from my life? Am I even in control of my own life? How can I improve the quality of my home life without compromising my professional life at the same time? How can I achieve inner and outer wellbeing, in other words?

Doing that successfully is far from easy, but undoubtedly Aki achieved it. He was taken from us far too soon, aged just 58, but he packed more into his all-too-brief life than did many who lived almost twice as long. And, in so doing, he illuminated the lives of everyone he met, friendly and funny and kind and wise as he invariably was.