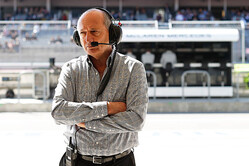 Friday saw Ron Dennis fail in his bid to prevent his 'partners' at McLaren putting him on 'gardening leave' for the remainder of his time with the McLaren Technology Group which includes the legendary F1 team.

Having failed in his previous bid to raise the backing to oust Mansour Ojjeh and Bahrain's sovereign wealth fund Mumtalakat, who own 75% of the company in total, Dennis had been working with a Chinese consortium in another bid to secure the necessary funding, but Ojjeh and Mumtalakat rejected the £1.65bn bid.

With Dennis told that his contract will not be renewed when it runs out next January, the Briton went to the High Court in London in a bid to prevent him being placed on 'gardening leave' for the remainder of that time. He failed.

With some predicting that Dennis' relationship with McLaren could end as early as next week, Bernie Ecclestone admitted that he doesn't hold out much hope.

"There was a court case yesterday (Friday) where he wanted to overturn what had happened and he lost the case unfortunately which is a pity because we don't want to lose Ron," Ecclestone told Reuters.

Asked whether this means that Dennis is effectively out, the F1 supremo said: "Apparently so, yes. I think he's appealing so he may win the appeal".

Ironically, in an interview with Sky Sports, Ecclestone, who previously owned the Brabham F1 team, said that if he were to start another team he would want Dennis running it.