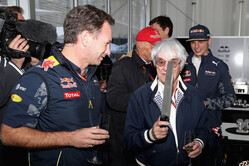 Comments Bernie Ecclestone made to the British media in Austin were taken out of context and misinterpreted, the F1 supremo has said.

Dismissing sensational headlines that suggested he wanted to see more crashes as this would excite the fans, the Briton says that while he would like to see the introduction of 'walls' in a bid to enforce track limits he has no desire to see drivers lives put in unnecessary danger.

"What I really said was that these walls should prevent the drivers from running off the track," he told the official F1 website. "Because now when they do, it is a case of somebody has to decide whether they ran off because they had a problem, or because they wanted to get an advantage or they make a mistake.

"That then means you have to rely on somebody's opinion," he continued. "If you have three stewards that means usually three opinions. One might call for disqualification, one might call for a penalty and the third one might say that there is nothing wrong with it at all.

"The easiest thing to do for some corners, and I really mean only some, and corners that are not deemed dangerous, where somebody could get an advantage by running off, would be to erect small walls to remind them that this is the white line. It would mean we lift the white line up by 40 centimetres."

As for media suggestions that he wants F1 to be more dangerous again, he said: "I have done more for Formula One's safety over the years than anybody else, including having a hospital at the circuits, so we don't need these discussions.

"I have never made it dangerous in Monaco and it's been there for decades. Baku was no problem, Singapore no problem. And if you ask a driver what race he would love to win more than any other, the immediate answer would be Monaco! There you have it: no driver ever complained about Monaco."

Indeed, despite widespread poo-pooing of his walls suggestion in Mexico, in the hours after the Grand Prix some fans were actually calling for Bernie's idea to be implemented after all or at least more gravel traps."

As for the danger side of things, earlier this week, Ecclestone, while not wanting to add to the risk, admitted that the element of danger is integral to the sport, telling Pitpass: "You go to the circus, the high wire is fifteen metres above the ground and there's no safety net. You think 'I couldn't do that', the person that walks on that high wire is special. But if that wire was only a metre off the ground, you'd think 'I could do that, that's nothing special'."