Ron Dennis forced to step down at McLaren

Ron Dennis has issued a personal statement after being forced to step down at McLaren today.

The move came, as expected, following the Briton's failure in the High Court last Friday to prevent his other main shareholders in the McLaren Technology Group, Mansour Ojjeh and the Bahrain Sovereign wealth fund Mumtalakat, having him placed on 'gardening leave'.

This in turn was in response to his continued efforts to raise the necessary funding to buy-out his main partners.

A brief statement issued by Dennis this afternoon reads as follows:

"I am disappointed that the representatives of TAG and Mumtalakat, the other main shareholders in McLaren, have forced through this decision to place me on gardening leave, despite the strong warnings from the rest at the management team about the potential consequences of their actions on the business.

The grounds they have stated are entirely spurious; my management style is the same as it has always been and is one that has enabled McLaren to become an automotive and technology group that has won 20 Formula 1 world championships and grown into an £850 million a year business.

Throughout that time I have worked closely with a series of talented colleagues to keep McLaren at the cutting edge of technology, to whom I will always be extremely grateful.

Ultimately it has become clear to me through this process that neither TAG nor Mumtalakat share my vision for McLaren and its true growth potential. But my first concern is to the business I have built and to its 3,500 employees.

I will continue to use my significant shareholding in both companies and my seats on both boards to protect the interests and value of McLaren and help shape its future.

In addition I intend to launch a new technology investment fund once my contractual commitments with McLaren expire.

This will capitalise on my expertise, my financial resources, together with external investment to pursue the many commercial opportunities I have been altered in recent years but have been unable to take up while being so committed to the existing business." 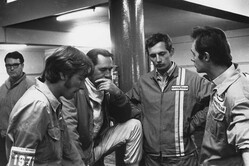 While we await the next move, this essentially brings down the curtain on Dennis' 36 year association with the team.

In 1978 and 1979, McLaren scored just 15 points each season, while in 1980 it was down to just 11 points with primary sponsor Marlboro losing patience.

Elsewhere, Ron Dennis had commissioned John Barnard to design a new Formula One car, which would have a carbonfibre monocoque.

Dennis had been running a preparation company, Project 4, which had run cars in Formula Three and Two, and which had also prepared cars for the Procar Championship - a series which used BMW M1 coupes and the races were staged on the Saturday of a Grand Prix weekend, with many of the top F1 drivers taking part.

Dennis, a former mechanic with Cooper and then Brabham, had established a reputation second to none for his standards and had also forged close links with Marlboro.

At the end of 1980, and with the assistance of the tobacco giant, Dennis took 50% of McLaren shares and became, along with Teddy Mayer, joint managing director. Within 18 months Dennis was in sole charge.