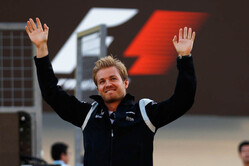 Amidst the euphoria of Mercedes third successive constructors' title, just days after his book Total Competition hit the shelves, it would be easy to forget Ross Brawn's role in shaping the all-conquering team.

While much of the success has come with the new hybrid formula, introduced after Brawn swapped the pitlane for the riverbank, there is no denying that the Briton, as he did at Benetton and Ferrari, laid the foundations for future success. Indeed, let's not forget that before it was Mercedes the Brackley outfit was the title winning team that bore his name and took Jenson Button to the crown.

While Toto Wolff, Niki Lauda, Paddy Lowe and others were to subsequently join and reshape the team, another who was there from the outset was Nico Hulkenberg. Indeed, the German endured three difficult seasons with the team as it gradually found its feet, more often than not merely being used as a yardstick with which the media could bash Michael Schumacher.

Now, Rosberg leads the championship by 26 points with just three races remaining, and Brawn, who encouraged him (and Lewis Hamilton) to Brackley, couldn't be happier.

Describing Rosberg as a "tough little bugger", he told the Daily Telegraph: "He's very resilient. He slips behind a bit, then he has a good talking to himself and comes back.

"A lot of drivers, having been punished by Lewis for a couple of years, would have gone away," admitted the Briton. "In many ways I would like him to win the world championship because he's done a fabulous job of getting beaten and coming back."

Referring to Hamilton, and in particular his 'difficult' weekend in Suzuka, Brawn feels that the three-time champion is in need of a constant confidante.

"Nico will put in a more consistent performance over the year, but would never quite reach the highs that Lewis could," says Brawn. "But then Lewis dips down a bit. He's more emotional in his approach. The whole thing with the press (in Japan) was an unfortunate distraction.

"I think Nico has a few people close to him who he can rely on. With Lewis I've not seen any signs that he has that support. You don't need those battles in the middle of a championship which is intense enough already. But sometimes people vent their spleen. That's why if there were a mentor or confidante he could vent those frustrations out on them."