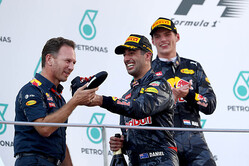 Cast your mind back twelve months and barely a day passed by without another threat from a member of the Red Bull family that unless a better engine partner could be found - preferably German - the team(s) would be walking away from the sport.

With neither Mercedes nor Red Bull willing to provide engines, especially the same spec as their works teams, and the only alternative being the Honda, the sport's powers-that-be even sought to change the rules in their quest to keep Red Bull and Toro Rosso on board.

Lo and behold, once the dust had settled, Red Bull opted to stick with the partner with which it had won four team titles, albeit renaming the units after a chronograph manufacturer.

Back in the present day, following its win in Spain, last weekend Red Bull scored a 1-2 in Singapore, further consolidating its runner-up spot in the 2016 Constructors' Championship.

Christian Horner was the first to give credit where it is due.

Asked, which has been the most significant factor in the team's revival this season - the drivers, the engine or more input from Adrian Newey - Horner told the official F1 website: "It is a combination of many factors.

"We came into the season not thinking that we would be in the top five in the constructors' championship, so I would say that one factor for sure is that the engine has made a reasonable step forward from last year... that is probably the biggest factor.

"On the chassis side, our senior technical team have done an amazing job," he added. "The drivers have played their part as well. They have extracted the most from what they were given.

"Strategically we are strong and we capitalised where possible on opportunities. And the car has been reliable, which is also a key factor."

Asked if he believes his team will be able to hold off Ferrari, he said: "It will be tight for the remaining races. Ferrari on average have a stronger race car than us, but we managed to make more of our opportunities. I am under no illusions that it will be very tight to stay where we are."