Horner adamant there were no team orders 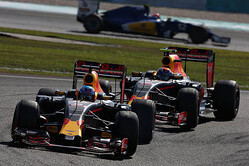 Already battling for a podium position, though Max Verstappen had previously insisted he was capable of taking the fight to Lewis Hamilton, the battle between the two Red Bull drivers this afternoon was thrilling enough.

Having already enjoyed a couple of dog-fights, when Hamilton pulled off-track with smoke and flames billowing from his engine, the stakes for the Red Bull duo were raised considerably.

However, despite a few brief lunges, Verstappen soon fell into line behind his Australian teammate, leading to claims that team orders had been issued.

"I made the decision," said Horner. "I instructed both race engineers: 'you are free to race, but make sure we prioritise forty-three points. Ask the drivers to respect that'. And they did.

"From our perspective, it was fine to allow them to do that," he continued. "They were both in the same engine modes, both in the same power state, so there was no real advantage one way or the other.

"At no stage was there a multi 21," he added, a reference to the infamous incident at this track in 2013 when Sebastian Vettel disobeyed team orders and passed Mark Webber. "Two different drivers, different circumstances. What we've seen is that there is a real respect between the two of them. They are both good racers, hard racers. I felt comfortable letting the two guys go head-to-head."

"I was pushing," insisted Verstappen. "but when you get very close, it overheats tyres and I was on old tyres. It was very difficult to get into DRS and, like I said, if you are on old tyres... with new tyres I had a few laps advantage but on older tyres to get within a second is very hard.

"Right until the last lap we were pushing really hard," he added. "The team said we were free to race but in a clean way and that is what we did."

Referring to their earlier battle, the youngster said: "We had a good fight, a fair fight, and I think it shows a respect between us. It's always fun when you give each other enough space. We were not trying to squeeze each other or anything.

"Going into Turn 7, we tried to brake as late as we could but at one point I decided to give up because I was a bit in the tighter line so, in case you clip the kerb, you bounce to the left, we both have nothing. It's better to be one and two."

"Max pitted under the virtual safety car," said Ricciardo, "and at that point his strategy looked very good, I had to hold him off in mid part of the race.

"It was a good battle, Max on fresher tyres and I was doing everything I could. It was fun, we were determined to win, we did it very fair with a lot of respect, I thank him for that."