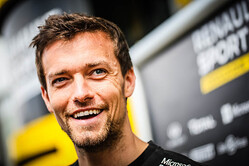 Renault Sport Formula One Team's Jolyon Palmer scored his first FIA Formula One World Championship point in today's hot and fast-paced Petronas Malaysia Grand Prix. Jolyon put his disappointment from yesterday's qualifying behind him to deliver in emphatic fashion his tenth-placed finish from P19 on the grid, thanks to a one-stop tyre strategy. Kevin Magnussen was unable to translate Saturday's qualifying form into a race result as contact back and front on the first lap damaged a brake cooling drum fence. Kevin's brakes subsequently became unsustainably hot, which meant retirement from the race was the only option.

Kevin Magnussen: "I was the filling in the sandwich as everyone reacted to the Vettel / Rosberg incident at the start. Everyone braked and went for the inside of the corner which isn't great if you're already at the inside of the corner and have contact from behind pushing you forward. That's motor racing sometimes. We changed the front wing and kept pushing, however the brake cooling was damaged, and the brake temperature kept climbing, so we had to retire. Nevertheless it's been a promising weekend. We continue to extract more pace from the car and we'll be pushing to keep this level of performance. I scored last time out; Jo scored today. Points are what we all want to see."

Jolyon Palmer: "Point-scorer: It feels good! I'm really happy, I think the whole week has been really positive. The race was really smooth - I wish it was always so straightforward! I was really disappointed with how qualifying went especially as I'd been feeling strong all weekend, so I'm glad the race went really well and we could make up for it today. The car gave me everything I needed, we handled the tyres well and the team did a great job with strategy and pit stops. We got a little bit of a break as well; finally everything came together and we got it home to P10!"

Fred Vasseur, Team Principal: "Congratulations to Jo for scoring his first point in Formula One. After a disappointing qualifying yesterday he got his head down and delivered a very good race. We ran to an aggressive strategy and Jo did everything required to make this work so a great effort from him and the team today. Kevin was unfortunate to be caught out as the result of an incident ahead on the first lap. Thanks to his strong qualifying, he was well placed for a decent points-scoring position, but there was nothing he could do. Today we saw once more that everyone in the team is pushing in the same direction and we will continue to fight for every point possible for the remaining five races this season."