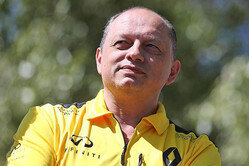 Cyril Abiteboul, managing director: Two races and two times in the points: that's more like it! Showing performance consistently enough to finish in the top ten every race is exactly on target and plan, and we need to keep this momentum going in Japan. It shows that when the going gets tough - and the headlines are not positive - that the team can rise above it and do the job it needs to do.

Completing an all-round encouraging picture for Renault in Malaysia I was delighted to see our partners Red Bull Racing score their first one-two result of the year and, indeed, the first one-two for the R.E.16 power unit. It shows that elements of our package are running exceptionally well.

Suzuka has historically been a strong track for Renault and we are looking forward to going there in just a few days. It's also an important market for our partners, notably Infiniti, so we will be looking to continue our run of form and bring home more points on Sunday.

Fred Vasseur looks back at an eventful weekend in Malaysia and previews the Japanese Grand Prix.

Fred, looking back to Malaysia, how would you describe the weekend?
Fred Vasseur: We were in the points for two races in a row and that feels good. Kevin qualified well and this was, of course, encouraging for the team. We had the potential to move up the order with him on Sunday but it wasn't to be. That said we learnt a lot in Malaysia. When you consider his tricky start, it's a testament to him and the team that they managed to put his disrupted FP1 and FP2 behind them and focused on the task at hand.

Jolyon was very disappointed after qualifying 19th on the grid. He knew that there was potential to have had a better result on Saturday especially seeing Kevin in Q2. He turned the disappointment into motivation for Sunday's race. He performed well and was clever with the strategy, which was very aggressive. He managed the tyres well and knew when it was key to push in the race. He had a great race.

Also, the double podium with Red Bull Racing winning the Malaysia Grand Prix was great news: it's very encouraging and a big boost for the future.

Is the team on track to attain its objectives?
FV: If we look back at races like Canada and Baku in June, I think that we've done a real step forward in terms of exploitation of the car and tyre management- the team is progressing race by race and this will continue to pay off in the future.

Is there any update on drivers that you could share with us?
FV: Clearly we are looking at every scenario possible and of course this also means taking in to consideration the work done by our drivers. Of course we will need to make the best choices for the team!

We are heading to Japan this week, what are your thoughts on Suzuka?
FV: Suzuka is one of legendary circuits in the calendar that we go to; a circuit much loved by racers. For the team, we approach every circuit with the same objective: we target points. We need the same determination whatever the circuit. I hope that the team will show the same aggressiveness in terms of strategy like we've seen in Malaysia last weekend.

Finally just coming back to Friday's incident with Kevin's car. Are you satisfied with how the team dealt with it?
FV: There are two aspects. We need to continue to investigate the why's - why this has happened and procedures to put into place for it not to happen again.

Secondly - and I've spoken to the guys involved - seeing the incredible reaction of the mechanics handling the situation was amazing. It really shows the commitment, determination and professionalism of the team. This is the best guarantee we have for the future.

With all design focus on 2017, it's down to the details of deployment of the R.S.16 to keep the fight for points in 2016 alive, as Technical Director Nick Chester explains.

What are your thoughts on Suzuka?
Nick Chester: It's an old-school track and one drivers really seem to enjoy. It's very challenging - in the first sector in particular with the first two turns and then through the snake. It has a great layout. In terms of engineering there's a bit of a trade-off as you need a good chunk of downforce for the high speed but there is a reasonable amount of time spent on the straights where you want less drag and there's a reasonable degree of power-sensitivity so it's a real balance of all these aspects.

It's no secret that car development is focused on 2017, so where has this recent upturn in form come from?
NC: There are a number of factors. The fruits of increased resources are filtering through and having an impact. We've made great strides in our understanding of set-up and in particular how we use the tyres as we've been able to allocate more resource to these areas. Our better resources also mean we are able to produce and renew parts with improved quality in comparison to our recent past. Even something like a floor sees performance degradation so by imposing shorter life cycles for the parts you are able to maintain a higher level of performance. Even though there are not new concepts coming to the car, we are able to make more out of what we have. Finally, both drivers naturally are developing and growing so we are better able to make the most of our potential than at the start of the season too.

Performance looked improved in Malaysia but there was also the aspect of Kevin's car catching fire: what happened there?
NC: It was a combination of factors. We were running test parts related to the fuel system for Mexico, which is a race at a much higher altitude and lower atmospheric pressure than we encounter at other races. This highlighted a flaw in our fuel cell assembly that we would have not have seen otherwise. We are modifying our fuel cell assembly ahead of Suzuka and revising the fuel system update for Mexico in light of what we saw.

The team's focus is on developing the 2017 car. What can you do this year which is relevant to next season?
NC: Many areas are not that relevant. For example, the aero package for 2017 is very different from the 2016 package. However, we're growing our team so ensuring how we work effectively is very relevant. In terms of the mechanical set-up of the car there are interesting lessons which can be learnt, especially concepts and approaches. Next year will be very interesting as the aero is very different, the tyres are very different. There's a lot of work to be done.

Where is the team in terms of designing the car for next year?
NC: We're pretty far along that process. The main chassis is almost finalised, so soon we'll start production. Suspension and cooling packages are being scheme and refined, the wind tunnel is flat out seeking gains and improvements. It's a busy and exciting time in the factory.

What's the potential of the car in Japan?
NC: Given recent performance of the R.S.16 we head there reasonably optimistic and aim to pick up some more points.