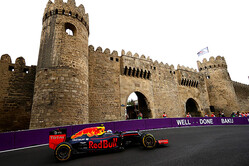 Ahead of today's second practice session, the air temperature is 25 degrees C, and the track temperature is 35 degrees. As for FP1 it is bright and sunny.

Unsurprisingly, this being a new track, driver struggled for grip this morning and consequently we saw a number of incidents.

Just about everyone had to use one of the many run-offs at one point or another, with Turns 1, 3 and 15 proving particularly popular.

As expected, the Renault powered team struggled, with not a single car making it into the top Ten. Indeed, it was a nightmare session for Red Bull with Daniel Ricciardo badly damaging his car when he hit the barriers at T15 and Max Verstappen's session curtails by a suspected gearbox issue.

Even pace-setter Lewis Hamilton had problems, the Briton going off a number of times and brushing the wall at one stage.

Following the session it was revealed that almost all drivers suffered some form of damage to their rear tyres, the left being particularly bad.

Subsequently, the GP2 qualifying session was cancelled after just two minutes when concerns were raised over the kerbs at certain parts of the track. Initially the inspection was limited to Turns 1 and 2, but Charlie Whiting subsequently called for inspections of all the kerbs.

It is understood that the issue is related to the bolts that hold the kerbs in place, the kerbing being temporary.

Despite fears that the session might be delayed, Charlie Whiting insists it will go ahead as planned.

Ironically, the original fear was that the (F1) cars might raise the tarmac that is covering the cobblestones in certain parts of the track.

The lights go green and as in FP1 Gutierrez leads the way, followed by Vettel, Grosjean, Magnussen, Nasr and Raikkonen.

Most of the running this morning was on the soft rubber, only one or two drivers trying the medium or supersoft.

Among the first out is Ricciardo who thanks his team for repairing his car over the course of the break. "Thanks for getting me out on time fellas," says the Australian.

Grosjean is the first driver to use the run-offs this afternoon, the Haas driver going off at T1. Shortly after Vettel is off at T1 also, whilst Raikkonen and Gutierrez go off at T3.

Following the first wave, Sainz tops the timesheets ahead of Rosberg, Wehrlein, Gutierrez and Bottas.

Ten minutes into the session and everyone bar Magnussen has posted a time, Hamilton now leading the way on 45.102.

A major wobble for Massa as he runs over some cement dust. The Brazilian veteran does well to keep it all together.

Raikkonen is told to watch the exit kerb at T6, apparently the instruction comes from race control and not his team.

Palmer is the latest to mess up at T3, the Briton joining a long line of others who got it wrong. And there will be more.

Having improves to sixth (47.313), Button does well to keep it out of the barriers after getting it wrong in T1.

"The times are already more than a second faster than this morning," confirms Pirelli, "despite some harder compounds being used."

As Rosberg goes quickest (44.913), onboard camera shows Alonso having all sorts of problems, his car making the weirdest of noises. With no power, but still making noises, the Spaniard leans forward and attempts to push the 'neutral' button on top of the cockpit.

Having gone quickest in the first two sectors, a mistake at T16 means Hamilton is unable to leapfrog his teammate.

Just over thirty-five minutes into the session, Magnussen finally heads down the pitlane.

"The top seven (Rosberg, Hamilton, Bottas, Hulkenberg, Perez, Sainz and Vettel) are now all on the supersoft tyres," says Pirelli. "Finding out some more data is the key priority here."

Magnussen explores the run-off at T1, then does the same at T15.

Three PBs see Ricciardo improve with a 46.930 but he can still only manage 15th.

With just over thirty minutes remaining, attention now shift to Sunday and drivers begin their long runs on heavy fuel.

Back on track following his earlier problem, Alonso is the latest go off at T15.

As the cameras pick up on Toto Wolff walking in the paddock with Bernie Ecclestone, Rosberg pulls off track at T1 and climbs from his car.

"Problem with the drive and engine," please advise, says Rosberg, who appears to be stuck in fourth gear. "Stop, stop, stop," comes the reply.

The Virtual Safety Car is deployed.