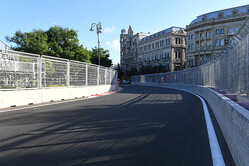 Jenson Button has expressed concern at the lack of run-offs at what is set to be the fastest street circuit on the F1 calendar.

At a time Pirelli has admitted concern at the possibility of 'standing wave', a phenomenon brought about by unusually long straights and encountered by Michelin over the weekend of the infamous 2005 Grand Prix at Indianapolis and again at Spa last year, Jenson Button has raised concern at the lack of run-offs and also the tightness of the pit entry in Baku.

"It's like we have gone backwards in certain areas," he told reporters, "I don't know why.

"Maybe the circuit was supposed to be the other way around," he continued. "It's a shame because a lot of the circuit is good. You look at the condition of everything and it looks good.

"I like the layout," he admitted, "I think it is exciting in some places but there are just some things that look like they need to be addressed. I am sure Charlie will say to me 'why didn't you speak to me first', but I haven't had the chance to and I can't see them changing anything anyway.

"We worked so hard on safety, improving circuits all the time, and then we come here and Turn 3, 7 and 14 don't have any run-off at all," he said. Turn 7 has got three Tec-pro barriers and then a concrete barrier at the edge of the circuit. But there is not much you can really do as there is a building in the way.

"Hopefully they have done their tests," he sighed. "Monaco has not got a lot of run-off, but this is a high speed street circuit. It is not like Monaco."

Indeed the run from Turn 16 to Turn 1 will see the cars at full throttle for around 20s if turns 18 and 19 are taken flat-out as expected, somewhat similar to the run between T1 and T5 at Spa.

Asked if a trial race should have been held beforehand in order to discover any particular trouble spots, the Briton said: "You shouldn't need a dummy race, you still can't tell unless there is an accident. If you've had the accident there is an issue.

"As far as I know they do every test possible for safety and the run off areas that you need for each corner they have done in the past and hopefully they do still do that," he continued. "But the way we've gone with safety, and pushed it, and some of the issues we have had in the past, you would think they would still do that. But it doesn't look like it from some corners, but maybe I am wrong."

At the official press coference, asked whether the driver had been consulted on the layout of the track and whether he had any concerns over safety, Fernando Alonso said: "We don't get involved in any of the layout or any of the decisions but, yeah, there are some corners that probably we will talk about. Some others that we need to go on the car first and see how they feel.

"We saw Singapore making some small modifications to some corners year after year until we find a good compromise," he added. "I guess it's going to be quite similar here. I think next year maybe some tweaks can be done after we go in the car.

"In terms of safety I think FIA ran many simulations in terms of how to make the run-off area safe enough. Obviously some of them are more than enough, some of them, maybe they look small but it's always better than Monaco, for example. It cannot be any worse than that."