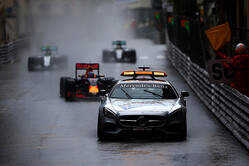 Having finally dried out following a soggy Monaco Grand Prix weekend, the Pitpass team has found its way back to the studio to discuss everything that happened on the streets of the Principality.

Rather than rain, it was problems with Skype and Mat Coch’s PC which caused the delay, the team getting off the grid as though led by a mobility scooter rather than the Virtual Safety Car.

Editor Chris Balfe is back on the grid alongside Mat Coch and Max Noble as the crew sinks its teeth into the meaty issue that is Red Bull and its apparent inability to perform a pit stop.

The multi world championship winning team delivered an amateur performance in Monaco which cost its de facto lead driver a likely win – and probably his loyalty to the squad also. For that reason, and others, Balfe suggests heads should roll at the Milton Keynes squad and Mr Ricciardo should be looking elsewhere for 2017.

Talking of Red Bull, Balfe and Noble share concerns that Max Verstappen is perhaps starting to get a little too big for his breeches. Barcelona might have been the perfect way to start his Red Bull career, but the duo is left questioning whether in reality it was the worst possible thing that could happen to the youngster as it hasn't given him the time to fully adjust and acclimatise to his surroundings.

His attitude across the Monaco weekend didn't do the teenager any favours either, Balfe wondering why the youngster has suddenly taken to nosism – that is the use of the first-person plural pronoun.

Almost missed under the steaming pile that was Red Bull's pit work was Lewis Hamilton's superb performance, the Mercedes driver putting in a solid day's work to make the most of his teammate’s apparent no-show. It wasn't lost on the Pitpass team who agree that while he wasn't the fastest car out there he did all he needed to do to remain in contention, as the very best always do.

In many respects the same can be said for Sergio Perez who seemed to out drive the Force India to nab third place from under Ferrari's nose. More than that the Mexican racer is beginning to seriously embarrass teammate Nico Hulkenberg, leaving Noble to question whether Perez is getting better or Hulkenberg worse.

Thankfully there will be plenty of opportunity for Noble to assess this in the coming weeks as the championship heads off on an eight week high-octane binge that takes in six different countries. It's an important phase of the championship, one which the team hopes Nico Rosberg bothers to turn up for.