Analysis of a crash

For most of us, probably including the man himself, Fernando Alonso's horrific crash during the season opening Australian Grand Prix is a distant memory.

Indeed, if you watched the excellent Life at the Limit on ITV4 at the weekend you'll realise that we now regularly see drivers dusting themselves off and walking aways from accidents that would have been totally unsurvivable not the long ago.

Alonso's Melbourne crash however was unique, in the sense that for the first time every single new safety measure has been coordinated to allow a full forensic study of what happened.

A high-speed camera directed at the driver has been installed on every car from the start of the season and in conjunction with a tiny accelerometer in the driver's earpiece measures the forces on his head. This, in tandem with the Accident Data Recorder, the F1 equivalent of the 'black box', measures all the external forces.

"Combined with the multiple camera angles from the cameras around the track, safety researchers have more information than ever before to determine what exactly happens at every millisecond of a crash," reveals the FIA in its Auto magazine. "This is essential for deciding on future areas of safety development and research." 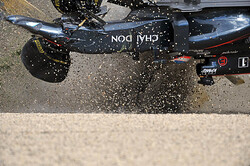 The Spaniard crashed into the back of Gutierrez' Haas at the end of the DRS zone between Turns 2 and 3 in Melbourne. At the time he was travelling at 313kph (194 mph) as he began his overtaking manoeuvre and had slowed marginally to 305kph (189 mph) at the point of impact, when his front-right wheel made contact with the rear-left wheel of Gutierrez's car.

Following the initial impact, Alonso's front-right suspension was destroyed, and the car veered left towards the outside wall. The collision was made with the front left corner of the car, resulting in a peak lateral deceleration of 45G, with high acceleration levels also recorded by the ear accelerometers, demonstrating the forces on the driver's head.

The High-Speed Camera, which took video frames of the driver every one hundredth of a second, showed that Alonso's helmet made contact with the left inside face of the headrest twice during the impact, corresponding with two peaks seen on the ear accelerometer data.

The car rebounded and proceeded to slide along the circuit towards the gravel trap. With front-left, front-right and rear-left suspensions destroyed, the car was heavily leaning laterally on its left side as it travelled over the grass. This left side dug into the gravel, which rolled the car and propelled it into the air, recording a lateral deceleration of 46G.

The car travelled in the air, rotating approximately 540 degrees (1.5 times) and was airborne for 0.9 seconds. On landing it made its initial contact with the ground on its rear impact absorbing structure, experiencing a peak longitudinal acceleration of 20G.

The car then rotated about its rear before falling and eventually coming to a stop on the left side of its engine cover, just before the tyre barrier.

Yet Alonso walked away.

A report into the accident by the Global Institute for Motor Sport Safety, the research partner of the FIA Institute, concluded: "From an initial 305kph impact, the car of Alonso was able to manage three high-G decelerations and an airborne phase without major injury to the driver, primarily due to a range of safety systems on the car performing well for their designed purpose."

Unbelievably, much of this data was delivered to medics and researchers at the track in real time.

"We receive the data in real time as the car is running, so if it crashes the ADR is able to send us a signal to give us a rough idea of the magnitude of the accident," Laurent Mekies, Global Institute's General Manager Research, told Auto.

"We have that in the same timeline as any other parameters so we can put that on the same graph with the car speed, where the driver braked, with anything that is recorded by the car and this allows us quite a reasonable understanding of the dynamic of the car from the loss of control to the actual crash and impact."

The accelerometer is housed in the driver's earpiece with a wire running straight into the Electronic Control Unit (ECU) of the car, alongside the cable from the ADR.

"That's the beauty of the system," says Mekies. "You gain all that info in a non-invasive way for the driver because we don't add extra connections; we just use what is already available there and add our own stuff into it. That was very much the driving concept in the way we are trying to implement this data system."

Similarly, the high-speed camera is hidden in the cockpit surround behind the steering wheel. However, footage from this camera cannot be delivered in real time because there is a huge amount of data from recording at 400 frames per second. To prevent any loss, this data is recorded twice on the car - on the camera itself and also transmitted to the ECU.

The footage has already proved invaluable for safety researchers. Mekies says: "What we want to understand is the exact dynamic of the head, neck and shoulders in a high-G crash and how they interact with the other parts of the cockpit environment - the padding, the HANS, belts and anything else that can be in the space of the driver. This camera allows us to better understand the exact forces on the head to a given displacement, the elongation of the neck, how it engages with the headrests, how the headrests perform and what we need to do to produce the next generation cockpit environment."

For any major accident, all of the information collected from a crash is studied by the FIA and sent to Global Institute researchers for further analysis.

"One of the primary functions of the Global Institute is to be a crash investigation body," says Mekies. "This means that on one side we do the crash investigations and on the other side we actually do the research into mitigating the consequences of crashes that we have analysed. So this gives us a full 360-degree approach.

"It's also very important that everybody fully embraces what we are trying to achieve and why we need all these sensors on the cars. [F1 Race Director] Charlie Whiting is giving us invaluable support by keeping the communication flowing with the teams and the drivers, and is always pushing us to go and target the next step."

But this work is not just limited to F1. The FIA recently launched a World Accident Database for every championship to insert data from major accidents. The Global Institute analyses that data and feeds back recommendations to the corresponding series.

Safety researchers have more data than ever before but there is more to come. Despite the detail with which that they can currently analyse an accident, there is always more that can be added to the picture to give a clearer view.