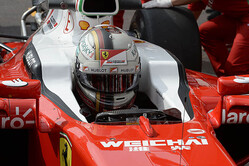 Ferrari has spent another 3 of its tokens on an upgraded engine for Montreal.

The move, which follows an upgrade for the Russian Grand Prix, is thought to leave the Maranello outfit with just three more tokens for the remainder of the season.

The upgrade is believed to be centred around the turbocharger, an absolute must for the fast straights at Montreal, and will be used in conjunction with a new fuel from Shell.

"There are long straights, very tight hairpins, and very slow corners, where the acceleration delivers all the power you may have," explained Mattia Binotto, head of the Power Unit department at Maranello. "It's a circuit where conditions may change during the race, for example with safety cars, barriers that drivers sometimes touch with their wheels, brushing the walls.

"It's a circuit where the engine power is quite important, like Monza and Spa," he continued. "The main straight, which precedes the finish line, is very long: you exit from a slow hairpin and accelerate through the gears. It's an interesting straight line for the engine men as well, because somehow it's where you have the overtakings, the acceleration, getting the maximum speed, trying to overtake.

"The hybrid system is important as well, because the main straight requires to deliver all the power and make sure that in the mixed part of the circuit you are correctly recovering the energy and getting the energy storage quite full by the time you accelerate our of the hairpin and onto the main straight."

Following a disastrous outing in Monaco which saw Sebastian Vettel fail to improve on his Q2 time in Q3, the German subsequently beaten to the podium by Sergio Perez, and teammate Kimi Raikkonen crashing out, Ferrari is also understood to be modifying its rear suspension in its search to improve mechanical grip, Maurizio Arrivabene having admitted that the SF16-H's Achilles heel is its failure to work with its tyres.

Renault will have upgraded engines for both drivers at its work team and Red Bull this weekend, the French manufacturer left with an unprecedented 21 tokens.

On the other hand, Honda, which has yet to spend any tokens since the season got underway, still has 14 to spend, while Mercedes has 11.